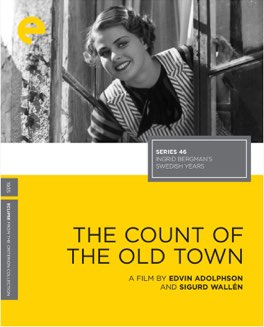 What a delightful and fun film this was. If the rest of this set is this great I’m in for a real treat.

The Count of the Old Town

I’ve written somewhat extensively over the years about my general distaste for the work of Ingrid Bergman. At the same time, many film friends of mine, whose opinions I greatly value, think that’s a completely crazy opinion. That’s fine of course, reasonable people, and even non-reasonable people, can always differ in opinion. As a rule though, I generally try to figure out why I feel the way I do, and even more so if my opinion disagrees with people who otherwise have similar tastes to mine.

That’s why I was so excited, but also trepidatious, about this set of films. Up until now, the films of Ms. Bergman’s I’d seen were all part of her English language filmography. This was my first time seeing her act in her native Swedish, and my first time seeing her earlier work at all. I wanted to see if that made any difference in my appreciation of her talent. One film is obviously not conclusive, but I have to say, I really enjoyed her in this film.

There is something I find so endearing about these neighborhood comedies. I’m not sure exactly what it is, but I think it has something to do with the smallness of the stories. The world seems to just be the people living in this charming district, and their problems are equally small. It gives everything such a nice feeling, and there’s just something so charming about all of it. It’s immensely helped along by this film in particular featuring lovable and slightly buffoonish town drunks. They provide such a nice foil for the more serious people among them. It’s always nice to be reminded the emperor has no clothes. - Dec 16th, 2018