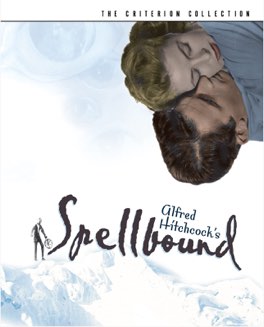 A fun, if badly dated, film that doesn’t need any deep thinking. It’s just an enjoyable and entertaining piece by an extremely talented director, and that’s definitely enough for me.

This is an entertaining film, if a bit silly. Certainly it’s much, much better than Notorious, which was the first Alfred Hitchcock/Ingrid Bergman film I saw. I was a bit worried after that one that I just didn’t like Ms. Bergman, but luckily for me that’s not the case at all. I just didn’t like Notorious. This film was a much more successful experience. Hitchcock’s films seems to be divided into a few categories. One of them, that I don’t like at all, are his dreary romantic melodramas. The other, that I really like, are his masterful suspense thrillers. Notorious is, unfortunately, strongly in the first group. This film, on the other hand, sits just enough on the good side that it works for me. It’s definitely got plenty of the dreary melodrama, the scenes in which our heroes profess their love are absolutely ridiculous. But, it has more than enough suspense to keep me interested and to make this a good film.

The story centers on the practice of psychoanalysis, and particularly that of Bergman’s doctor character and the various “guilt complexes” she tries to solve. As the film opens her boss is retiring, being forcibly replaced actually, after a nervous collapse. The new head doctor shows up and she immediately falls madly in love, but there’s clearly something just a bit off about him. After he collapses in the middle of the surgery room his story begins to unravel and Bergman’s character, too in love to make good choices, decides to abandon her post to “save him.” It’s an absurd story really. I’m no psychoanalyst, but even I know this is a bunch of ludicrous nonsense. Still, it’s so earnestly told, and the story moves into such interesting places, that I didn’t really mind. This is definitely a Hitchcock film, full of little moments of humor, and excellent pacing, that keeps it from getting too stupid or dreary to enjoy.

The acting here is pretty great across the board, but there’s definitely one standout performance. It’s not Bergman, who does an excellent job with the script she was given. And it’s not Gregory Peck, although he’s perfectly decent as well. He might not be my favorite Hitchcock lead, that would be either Robert Donat or Cary Grant, but given the complex character he was given I can’t complain. No, the standout performance here is that of Michael Chekhov as a former teacher of Ms. Bergman’s character. He’s absolutely sensational. He plays the only really sensible, non love-struck character, in the entire film. He gets all the best lines, and really he punctures the sappy melodrama this film is in danger of descending in to. Without him I don’t think I would have enjoyed it even half as much, he’s that critical to the success of the picture.

The cinematography is phenomenal. There are a couple shots in this film that are absolutely drop-dead amazing. There’s a shot near the end, that I won’t ruin for anyone, that actually made me jump out of my chair. The much hyped dream sequence, storyboarded by famed surrealist artist Salvador Dalí, isn’t as incredible as I hoped it would be, but it’s still pretty great. I think I had built it up a bit too much in my head, but it does add a nice quality to the story. I’ve been on a run of thought provoking films lately, films that require a lot of work on the part of the viewer to get the most out of them. It was really nice to sit down and just enjoy something fun and stupid for a change. There’s nothing to analyze here, no deep message to puzzle out. This is just a fun little film, with a well plotted story, and a legitimately surprising ending. - Apr 18th, 2014