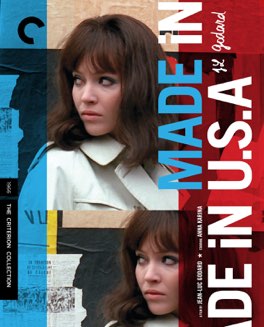 It turns out that being incredibly beautiful, with a truly amazing color palette, and starring one of my all-time favorite actors, isn’t enough to get me to enjoy a film.

I think I have the most complicated relationship with Jean-Luc Godard of any director in this project. At his best, his is a singular vision which literally spurred my love and interest in the power of foreign cinema. At his worst, he is almost incomprehensibly pretentious, preferring an almost experimental cinema that baffles me.

What’s most intriguing to me is when he’s both of those things in the same film. This movie is over my line, at least my current line, into the territory where I struggle to find value. This feels like a student film, and it was essentially made like one. He filmed it so quickly that I don’t think he even had time to figure out what he was making.

It feels like he went out and captured a bunch of interesting looking things, and then tried to tie in some sort of plot. As was the case in Pierrot le fou, he’s losing any ability to care about the noirish American Gangster films he had relied on thus far. This represents a point on that journey even further away from coherence, where I couldn’t make any sense of what the story was actually about.

It involves a man who has either died of natural causes, committed suicide, or been murdered. He was a communist, maybe? His girlfriend has come to find out what happened to him, and from reading the synopsis I know she’s supposed to be some sort of hardboiled detective type.

In that sense it’s a bit like remaking Alphaville with Anna Karina in the Lemmy Caution role. She goes around interacting with people who may be the police, or may be gangsters. She gets information, I guess, about what happened. At some point she figures something out and takes action. What she figured out, I have absolutely no idea.

I didn’t enjoy this. It was too unstructured for me, while still pretending it wanted me to find structure. I think that’s my issue, I don’t like puzzles that can’t be solved. Don’t act like there’s some mystery I’m supposed to figure out, when you don’t have any idea what a resolution even could be. I don’t mind working at figuring things out, but I don’t like it when there’s a pretend solution that cannot be found. - Jan 12th, 2019