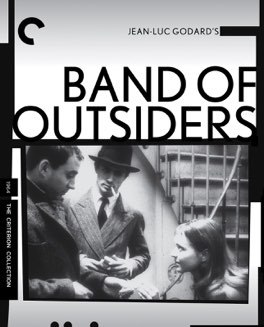 As stylish as they come, entertaining and cool. I love this film as much now as when I first saw it.

This is one of the few films in this project I’ve already seen. As I mentioned in my essay on Breathless, Godard’s films are what got me into exploring foreign cinema. After I saw Breathless, I went on a mini-tear through some of his other early masterpieces. This one in particular has stayed with me since then, but it was only watching it this time that I think I’ve figured out why.

This is the story of three young people, one girl from the suburbs and two boys from Paris. One of the boys has met the girl, and learned from her about a large amount of cash another member of her household has stashed away. That boy has told the other boy, and together they’ve decided to rob the house. The film consists of their convincing the girl to go along with it, trying to date the girl, and the inevitable mess that follows.

What I find fascinating about this film, is how in-transition it is. Now that I’ve seen some of Godard’s work from after this point, I can really start to see it. It was shortly after this film that Godard began to tire of the trappings of the American gangster picture, but I think you can already see the fatigue setting in. This is ostensibly a heist film, or at least a hard-boiled film. But those parts are the least interesting to me, and seem to be the least interesting for Godard as well. This feels like the culmination of one period, and a tentative step towards something new. - Dec 10th, 2017