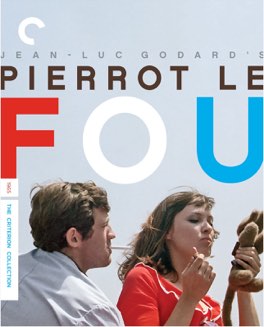 While not at the level of my favorite Godard films, this is still an artifact worth exploring. At any rate, I’m an absolute sucker for Anna Karina.

I cannot fathom the kind of person who would make an entire film while they were completely unsure about what kind of film they wanted to make. Maybe it’s just what happens when you’ve already made ten films, maybe you grow into that kind of confidence. Maybe you just do what you have to do, because the money and the scheduling line up and you’re stuck. This film, along with Federico Fellini’s 8½, boggle my mind by their very existence.

It’s perhaps unsurprising, given what I’ve just said, that the film is a mash-up of a bunch of themes and ideas that don’t really fit together. It’s based on a book about an older man who falls dangerously for his babysitter, and follows her into a life of crime. That story was transformed by the casting of Anna Karina and Jean-Paul Belmondo, who are too close in age for the central idea of older man/younger woman to make any sense. Instead we have a man in search of an artistic sensibility, who rediscovers it while on a criminal rampage with a dangerous woman.

I can relate to the idea of discovering inspiration in unusual circumstances. The hardest time for me to feel inspired is when I have too much free time. I need constraints to find my voice. I need constraints to feel connected to the world. So perhaps I completely fathom the kind of person Godard is, at least during the making of this film. I would likely feel overwhelmed by circumstance if thrust into the same situation, but would also likely feel oddly creatively buoyed. - Dec 2nd, 2017