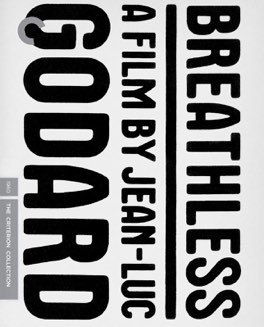 One of my all-time favorite films, it destroyed conventional cinema and replaced it with something far more interesting and enduring.

There was before Breathless, and there was after Breathless. That’s how Criterion describes this film, and, for me, it’s absolutely true. When I first saw it, years ago, it absolutely changed my life. It introduced me to the world of French cinema for one thing, especially the French New Wave and the films of both Jean-Luc Godard and, very shortly thereafter, Jean-Pierre Melville. It shocked me with how much time it spent ignoring its own Hollywood-style story and instead focusing on real people. It had a completely different pace than any film I’d seen before, and it changed the way I watched films and how I felt about them. It’s that powerful.

The story is a send-up of the noir films that both Godard and I love. Heavily influenced by both Melville and American films like The Maltese Falcon, it’s a classic noir story, but what Godard does with it is what’s so amazing. It starts with the unbelievably great Jean-Paul Belmondo killing a cop, and heading to Paris to find a girl he likes and try to convince her to run away to Rome with him. With that simple story the film creates an incredible narrative about young love, and life, that is somehow both fast-paced and also slow. The part of the film that blew my mind the first time I saw it, and continues to do so, is that middle part. It’s basically a half hour of Belmondo and the girl, played by the absolutely beautiful Jean Seberg, improvising and just being around each other. There are so many incredible lines and moments as they taunt each other and, at least for a little while, love each other. It’s utterly perfect.

I find it really hard to talk about films that I like this much. There are, after all, only so many superlatives I can call on to explain it. This is a shocking, honest, amazing, perfect movie. Seriously. I’m just not sure what else to say after that. I want to run up to everyone and shake them and say “Have you seen Breathless?” and if they haven’t make them watch it immediately, it’s that perfect. It’s so full of incredible moments and little touches. It is, in many ways, a small film, in its story and setting. And yet every time I see it I catch something new. This time it was an early reference to another favorite film of mine, Melville’s fabulous Bob le flambeur. One of the characters here makes a direct reference to the main character there. It’s as fitting an homage as I can imagine Godard making, and so appropriate given Melville’s influence on the New Wave.

There just weren’t films made like this until it showed up. So clearly in love with the tropes of Hollywood and yet so much deeper and more interesting. Story wise, this could be any early Humphrey Bogart film, and in fact Belmondo’s character in the film is obsessed with Bogart. But the way the main characters relate with each other, the complete realness of their portrayal of the fickleness of youth, is astonishing. I’ve never killed a policeman and been on the run, or dated a criminal while riding around in stolen cars, but I have been these people. I have done goofy things to find out if I love someone, or sat around worried about the fact that I “can’t think of anything to think about.” And that’s what the film is really about, the plot is basically an excuse to get these two phenomenally real people together and see what happens. It is, no pun intended, breathtaking. - Apr 30th, 2014