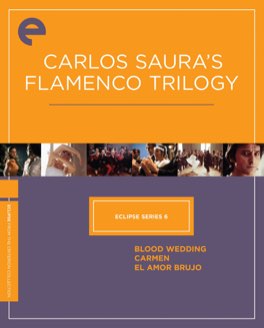 The stories were sometimes a bit goofy, and the acting certainly wasn’t the best, but it just didn’t matter at all. The only things that mattered were the incredible music and the perfect dancing.

Carlos Saura didn’t originally intend to make a trilogy of Flamenco dance films. In fact, prior to attending a rehearsal for an Antonio Gades’ choreographed production of Federico García Lorca’s 1933 play Blood Wedding, he wasn’t even all that familiar with the art form. But as with Wim Wenders and Pina, he was immediately overwhelmed by the beauty of what he saw. He decided to shoot the rehearsal, in the most stripped down way possible, and release it as a film. That led to two more collaborations over the next five years, and to this set of absolutely remarkable films.

As I mentioned when discussing Pina, I know very little about dance, and even less about Flamenco. However, the same as with that magnificent film, I fell absolutely in love with what I saw here. There is such a power and vitality to great dance, it manages to somehow be completely inscrutable, while at the same time making total sense. This film follows choreographer Antonio Gades’ dance troupe through a rehearsal of the eponymous Flamenco ballet, and it has a similar vitality to that of Vanya on 42nd Street.

There’s something about seeing great artists rehearse, it brings a completely different feel to the experience. Saura does a phenomenal job here of cutting things together to present the rehearsal in the most dramatically wonderful way possible. I lost all sense of the thing as a limited backstage set, and instead was completely caught up in the beauty of the movement, and the heartbreak of the story. This was truly wonderful, I’m really excited for what comes next.

In this second installment in the trilogy, Saura moves from an honest capturing of rehearsal, to using a staged rehearsal as the backdrop for a fictional dance narrative. It’s a brilliant ploy, one that essentially recreates the first film as something like the centerpiece of the second. The vérité style of the story of a performance of Bizet’s Carmen, it uses that scaffold to play out a modern version of the same tale in the lives of the performers.

As we watch the story get more and more complicated, it becomes impossible to tell what’s real and what’s performance. Eventually I lost all connection to what was “actually” happening, but as long time readers know I don’t think that has to matter at all. Like a sort of limited Rashomon, this film plays with the idea of objective reality, but as a subtle, almost stylistic, choice. It’s a conceit for sure, but it works incredibly well. The film is as beautiful as the first, if not more so, but the addition of the narrative makes it even more compelling for me. I absolutely adored this film.

This was the most traditional of the three films by far, but even here Saura nods towards their rehearsal nature. Ostensibly a straightforward narrative retelling of one of Spain’s greatest operas, the film starts with a long shot of the obvious film studio it’s being shot in, before settling in to a dusty Andalusian village. The story is of a young couple, betrothed as children in an arranged marriage, and the people they really love. Even here Saura nods towards the blended nature of these films, using a modern-style flamenco pop band to play the couple’s wedding party.

These tricks do nothing to distract from the incredible nature of the film, and, if anything, they enhance it. The film, at its core, is a haunting ghost story, and definitely the most dramatic and involved of the three films. I found myself getting completely lost in the setting and the characters. Here the dance was subtler, and used more as an accent to the ideas than as the focal point. It worked wonderfully, and this was probably the most complete of the three films. It was an absolutely perfect way to end what was a phenomenal collection. - Oct 19th, 2015