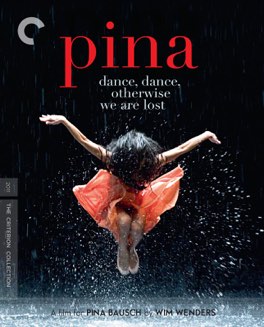 For a novice to contemporary dance this was a complete revelation. I was stunned by its beauty and power, and overwhelmed by the feelings it inspired inside me.

I should start by admitting that I have almost no knowledge or experience with the art form of contemporary dance. Oh, I’ve been to a few performances, and I mostly enjoyed them, but I am the farthest thing from an educated observer. I’ll also admit that I’d never heard of Pina Bausch, nor the Tanztheater Wuppertal, prior to watching this film. Finally, I wasn’t able to watch this in the 3D that was the primary reason director Wim Wenders decided to make the film in the first place. Even with all those caveats, however, I was absolutely blown away by this film.

There was just so much beauty here. So many moments that caused me to gasp with surprise and delight. Such a vast array of intense emotions, which poured out of every performance. My initial impression of the film was that it was going to be really heavy, and parts of it were. There was sorrow in some of these pieces, certainly, and sadness too, but there was so much more than that. There was also laughter and joy, humor and suspense.

These dances, which basically had no words, managed to convey such meaning, were so full of immense ideas. These weren’t the kinds of ideas that you could turn into a concrete message, or any kind of conventional narrative. Rather, they were simply meant to convey the emotions being presented at a primal level. To make you feel, sometimes many contradictory things all at once. And they succeeded magnificently.

I also found the history of the project itself very interesting, and very sad. Wenders had intended to make a film with Pina Bausch for twenty years, but was always stymied with how he could convey such a spatial art form within the bounds of two dimensional cinema. Just as he was discovering the new technology of 3D, and was finally ready to make the film, Bausch died unexpectedly of cancer. Wenders wanted to shelve the film, but the remaining members of the dance company prevailed upon him to proceed, and to use the film as a tribute to the work of Bausch.

The film is made up of new renditions of some of the most famous dances from the history of the Tanztheater Wuppertal, interspersed with personal stories from the dancers, about their experiences of Bausch. These stories are presented in a fascinating way, where the dancers are filmed motionless, as we hear voicovers of them talking in their various native languages. What it ends up achieving is to underscore the physical nature of dance, and of the dancers themselves. It’s an unspoken reminder that the important part of this art form is in movement, not language.

The dancers are incredible, but the other character I wanted to mention is Wuppertal itself. The performances we see are entirely performed in and around the city, and it’s an absolutely stunning locale. I was especially enamored with its overhead suspension railway, and of the way the dancers, and the film, used it to great effect. This film has given me a real desire to visit this city, to explore its streets, and to try to tap into the immense magic it gifted these performances. This was an achingly beautiful and heartfelt film, one that I intend to return to many, many more times. I’d also really enjoy the opportunity to see it in 3D, to get the full presentation that was intended, and to unite the aesthetic beauty I witnessed with its full physicality. - Feb 23rd, 2015