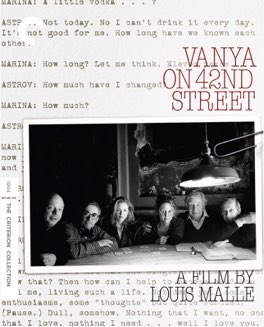 A deep and compelling version of classic theatre, it works in part because of its unusual and stripped down nature.

There is something so powerful about great art, in that it can survive virtually any presentational circumstance, and still overcome you with its power. Such is absolutely the case here. In 1994, Andre Gregory and Wallace Shawn of My Dinner with Andre fame, reunited with director Louis Malle to make this film version of their production of Anton Chekhov’s Uncle Vanya. Their version had no sets, no costumes, and was little more than rehearsal, but loses nothing of the power of the original play.

The story follows the eponymous Uncle Vanya, a broken man in his forties, who believes he has wasted his life. He manages the estate of his late sister, along with her daughter, his niece Sonya. The play takes place during a visit by Sonya’s father, a recently retired professor, and his second wife Yelena, who is much younger. Both Vanya and a doctor friend of his are hopelessly in love with Yelena, while Sonya is in love with the doctor, who doesn’t notice her due to her plainness. It’s a complicated story made far more understandable through David Mamet’s excellent adaptation, based on a literal English translation of the original Russian.

As I said in the opening paragraph, there’s no set or costumes here. This isn’t so much of a performance of the play as it is a look-in on a table-read style rehearsal of the text. The various actors involved, including Julianne Moore, had come together in order to have a better understanding of the original play, and had already been rehearsing semi-regularly for three years at this point. It could make for a total disaster, and worse a boring film, and at first, I was a bit turned off by all this spartanness, and the total lack of anything visual to connect me to the story or the characters. But over time, all that faded away, and I found myself completely captivated by these people, and their story.

A lot of that was made possible by the fact that the actors are so clearly totally embedded in their characters, which makes sense given how much longer than usual they had been working on perfecting them. It shines through so clearly, and I think it’s what allows great art to overcome a total lack of any other visual context. This is art at its purest, just ideas, with no decoration to distract your attention or cover over any faults. It’s a high wire balancing act, that could fall over at any moment. Even the slightest nod towards the absurdity of the thing, watching these people in their twentieth century clothing for instance, could destroy the emotional impact. It’s quite a testament to the abilities of those involved that it never happened for me, I was completely theirs from beginning to end.

Louis Malle’s direction helps a ton in allowing them to achieve their goals. He has the perfect sense of when to focus on the story and when to intrude with the scaffolding of the rehearsal aspect of the piece. In his reminders of this rehearsal nature I became somehow even more invested in the story itself. It also doesn’t hurt that they filmed the whole thing in the New Amsterdam theatre, which has since been renovated by Disney, but at the time had been long abandoned. It’s crumbling grandeur provides a fabulous backdrop to a play about the crumbling nature of the lives of its characters. The whole thing comes together to create a completely different type of film experience, one that I enjoyed immensely. - Aug 1st, 2015