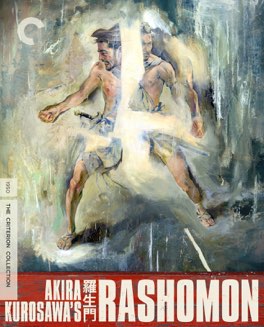 This film is acclaimed and with good reason. It’s one of the best stories about people, truth, and life that you’ll ever see.

What is the nature of truth? Is objective truth possible? Does eye-witness testimony mean anything? It’s the lowest form of evidence in scientific research and yet it’s the highest form in our legal system. Do two people see the same event? Does everyone lie, maybe only to themselves, to protect their own view of themselves and their world? These are the issues being confronted in this film, and it’s an absolute masterpiece.

The story is fairly straightforward, at least the parts that everyone agrees on. Two men have just been to a criminal inquiry over the death of a samurai. They are sheltering at a ruined temple from torrential downpours. A third man asks them why they seem so flustered and they explain that at this inquiry they have just heard three completely contradictory tales of the crime that occurred. They tell the interested man what occurred, the testimony of a notorious bandit, a beautiful noblewoman, and the spirit of her dead samurai husband. Finally one of two men tells his own tale of what “really happened.” The trouble there is that he has already admitted to lying about the incident at the inquiry. We never learn what the “real truth” is, if there even is one.

Through this simple setup Akira Kurosawa shows us how fallible we are, and how little “real truth” comes in our telling of day to day experiences. Ask any child about the game of telephone and they’ll tell you about hilariously wrong versions of stories told by people after just a few exchanges around the circle. How much more true must that be when a man has been killed and someone is on trial for his murder? How can we take anything that anyone says about an event like that at face value?

Here we have three men and a woman, each of whom tells a tale where they are the hero. They all agree that the woman was raped and that her husband is dead. They don’t agree about almost anything else, but in each tale they are full of honor where everyone else is lacking. And then we have two other men, one a simple bandit who sees the humor in life. He already knows that everyone lies and sees the world as a dark comedy. The other, a priest, whose belief in the goodness of man has been shattered by what he has witnessed at this trial. The interactions between these three men, waiting for the rain to stop, are the real heart of the picture to me.

The film ends on a sweetly positive note. Nothing has been resolved about truth, and we have no idea what “really” happened. But we are left with the idea that there is some goodness in the world, in spite of all the sadness. It’s a beautiful and wonderful way to end an incredible work. - Mar 23rd, 2014