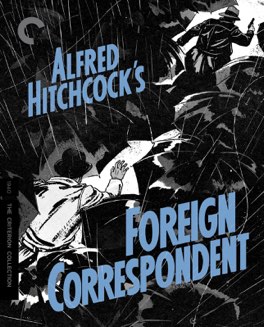 A great war-time thriller that, despite coming from Hollywood, might be the best British-period film Hitchcock ever made.

This film is almost quintessentially an Alfred Hitchcock affair, all the trademark elements are here. That wonderful mixture of suspense, humor, action, and wit that we associate with his best films. The way ordinary people inevitably end up doing heroic things, basically just because. And the use of one of his favorite story tropes, that of a secret clause in a treaty which, if revealed, would be of great use to “the enemy.” In fact, even though he made it in Hollywood, this feels like the last great British Hitchcock film to me. It has far more in common with The Lady Vanishes or The 39 Steps, for example, than it does with his later American films like North by Northwest or Psycho.

The story here follows American reporter Johnny Jones, renamed Huntley Haverstock by his boss, as he heads to Europe to determine if there will be war or not. Early in the film he meets a Dutch diplomat named Van Meer, one of two signers of the treaty with the aforementioned secret clause. After seeing Van Meer assassinated, but discovering that his death was faked, Jones is determined to discover the truth behind it all. It’s interesting to note that in this film, unlike the previous Hitchcock uses of this particular plot, the enemy is most definitely specific. Because the film came out after the declaration of war, Hitchcock doesn’t need to pussyfoot around who or what is behind the conspiracy. He is very specific that the enemy is Nazi Germany, which turns this film from being simply another intricate thriller into a propaganda piece as well. That propaganda is, however, ultimately the weakest part of the film. An additional ending was added after the film was finished, to deal with the fact that England was now actually at war with Germany, and it comes off very ham-fisted and over the top. The film would be stronger without it.

It’s a wonderful film. The story is tense, full of twists and unexpected turns. There’s a real vastness to the plot that’s missing in the earlier films. Probably the result of the enhanced resources that came from working in the Hollywood environment. The cinematography is great, there are so many incredible scenes, especially the airplane sequence that ends the film. The acting is also mostly great. Really the only issue is the casting of Joel McCrea as the lead. Hitchcock didn’t want McCrea, he wanted Gary Cooper, but Cooper was uninterested in thrillers at the time. And it’s fairly easy to see why Hitchcock had reservations about McCrea, he isn’t much of a leading man. He’s much more suited to films like Sullivan’s Travels, where he plays an out-of-touch Hollywood director, than this sort of thing. In the role of a Hitchcock hero he seems slight, lacking in depth and character. The great Hitchcock leading men are strong, witty, but mostly seem like they can do anything. I’m thinking of Robert Donat in The 39 Steps, or Cary Grant in North by Northwest. In contrast to those incredible performances, McCrea comes off pretty weak.

Luckily there are many better performances around him, and so he doesn’t seriously harm the film. Laraine Day is wonderful as the love interest, even though McCrea’s lack of charisma makes me seriously doubt she’d fall for him quite as quickly as she does. George Sanders is phenomenal as Scott ffoliet, he brings the type of Hitchcock hero we’re used to seeing, and really he should have been the lead. And Robert Benchley, Herbert Marshall, and Albert Bassermann all turn in delightful performances as well. Bassermann’s is particular impressive given that he supposedly didn’t speak any English and had to learn his lines phonetically. Ultimately this is just a really great Hitchcock film. As a huge fan of the British era Hitchcock films, I’m glad I effectively get one more, and this one with all the resources of a Hollywood film. It’s a nice treat. - Apr 13th, 2014