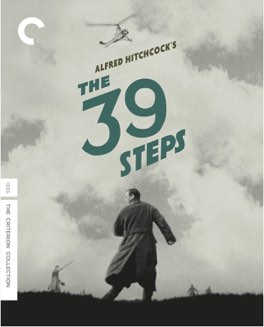 A complex and impressive film, especially given the period in which it was released. Definitely worth watching.

This is a beautiful film. The various locations used for the shooting, in England and Scotland, are so well presented and lovely. The scene on the Forth Bridge is notable in this regard, but the whole thing is really special. From the opening shot to the closing one it’s just a beautiful film.

It’s also a fairly remarkable film, especially considering it was originally released in 1935. It’s so complex and rewarding, so funny and smart. Chock full of mystery and interesting characters. Especially the character played by Robert Donat, he’s one of my favorite Hitchcock leading men, so charming and charismatic. Here he is dropped into another of the classic 30’s and 40’s film tropes, that of the “secret vital to our defense in danger of falling in to enemy hands,” and he handles the situation near perfectly.

Also remarkable is the acting of Madeleine Carroll, who plays his foil initially, and does it so well. From the beginning, when she outs him to some policemen on a train, she’s wonderfully indifferent to his well-meaning attempts to convince her of his innocence. And it’s so nice to see a film from this era where a man isn’t simply taken at his word or able to immediately win over a lady purely on the basis of his gender. All the scenes where they are together are great.

It’s also interesting how the era of this film reflects in its story. In 1935 the world was significantly farther from war then we would be even a few years later. And because of this, the film is also much farther from war. Unlike, say, Foreign Correspondent, no one here is talking about war. The “European power” who is the enemy here is never named. The bad guys have accents that are just as British as the good ones, even our Canadian hero isn’t particularly Canadian in his speaking.

This is where Hitchcock began to use his greatest theme, that of a regular person falsely accused of murder and thrown into a complicated and treacherous world where the only way to survive is to solve the mystery. And it’s one of his best. - Mar 14th, 2014