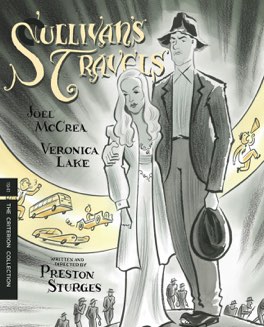 It’s a wonderful story, incredibly well made, and with an actual message. Something which is shocking given the Hollywood of it’s time.

This is a fascinating film. Similar in purpose to My Man Godfrey, it tries to show the depths of the depression in then-modern America, while at the same time remaining a comedy.

And it definitely achieves those goals. It is, in many ways, a much darker portrayal of misfortune than that wonderful film though. Here the hero goes through real trials, and learns real lessons. Well, eventually.

The lead is played by Joel McCrea, who I didn’t really care for in Foreign Correspondent. In that film his lack of depth was frustrating, but here, cast as a Hollywood director known for his lack of depth, it’s a strength. He delivers an impeccable performance, and really makes us believe in his characters journey.

Similarly, I wasn’t super fond of Veronica Lake in I Married a Witch, her character in that film was also lacking depth, and fairly annoying. But here, again, she delivers an impressive performance as a down on her luck girl swept up in McCrea’s insanity. It’s nice to see both of them in a film as good as this one, performing as well as they do.

What a difference a great script can make to the performances of otherwise middling talent.

The story here is ridiculous but works incredibly well. The general idea is that McCrea, the aforementioned Hollywood director, is tired of making silly comedies and wants to make a “serious” film about the suffering of poor people.

After his studio execs point out that he doesn’t know anything about poor people he decides to hit the road as a hobo to learn what life’s hardships are all about. At first he flails about, constantly ending up right back where he started in the lap of luxury. But eventually he does discover real life, and what he finds is well worth waiting for.

The film has many great qualities. The humorous attempts at being a hobo at the beginning. The interactions between McCrea and Lake, even though he supposedly loathed her to the point that he turned down the lead in I Married a Witch rather than work with her again.

The prisons scenes, which remind me a bit of Cool Hand Luke. The wonderful cinematography, especially during the risky silent section where McCrea and Lake first learn what it’s really like to be a hobo. And the ending, where we learn just what McCrea has gained from his ridiculous experience.