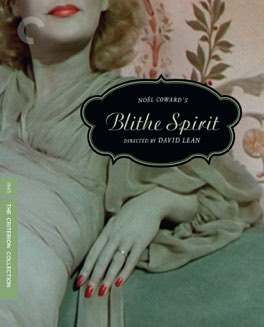 A much less serious and intense film than I’ve been watching recently, but one that I definitely enjoyed. A classic screwball comedy if I’ve ever seen one, and with the wonderful Rex Harrison to boot. Definitely worth checking out.

This is a silly and minor film, but nevertheless an enjoyable one. There’s something I absolutely love about films from the 40’s, and this is a perfect example.

The production codes of the time meant that filmmakers had to get very creative in order to get their message across, and the best films of the period are full of arch little jokes that are only apparent if you read thoroughly between the lines. This film is definitely no exception, and it’s fun to try and figure out what the filmmakers really meant as you’re watching.

Unlike the previous Coward/Lean collaboration that I reviewed, the wartime propaganda film In Which We Serve, this is a rather simple comedy about domesticity and the afterlife. It’s a trifle of a film really, but I definitely enjoyed it, and I would recommend it to anyone with a love for classic screwball comedy.

As is keeping with the genre, the story here is absolutely absurd. It starts with an old favorite, Rex Harrison, as a middle-aged writer who decides to have a séance in order to gather some information for a novel he’s working on. He and his second wife, played well by Constance Cummings, invite another couple from their small town to come and watch a local medium at work.

That medium, who totally steals the show, and is played to perfection by Margaret Rutherford, ends up accidentally calling back the ghost of Harrison’s first wife. This is, naturally, very disconcerting to his second wife, who spends the early part of the film thinking he’s either gone mad or is messing with her. Eventually she realizes that the first wife really has come back, and is understandably not all that happy about it.

Things continue in a rather absurd direction from there, with a ton of funny comedic moments revolving around who can and can’t see who, and the whole thing ends in an appropriately ridiculous place. Along the way there’s a great deal of the kind of pitch-perfect dialogue that Coward was famous for, and a ton of really neat practical special effects.

It’s so great to see Rex Harrison in another 40’s British film. I loved him so much in Pygmalion, as well as in Night Train to Munich; he had such a cutting edge to his comedic delivery. Here that edge is enhanced by the equally cutting dialogue that he has to work with.

Some of the best moments of the film are between him and his second wife, they play off each other with a banter that can really only happen when both sides have had their words written by a first rate writer like Coward. Margaret Rutherford is the main event here though. She is just so unbelievably great as the dotty, and quite likely crazy, medium. Every single scene she’s in is hilarious, and it’s so great to see her absurdity played against the typically stuffiness of the proper British people around her. She doesn’t miss a beat as they are basically dreadful to her, she just ignores it and continues being her ridiculous self.

The two wives are both played adequately, neither really moved the needle much for me, but they don’t ruin anything, and at the very least that’s what they needed to accomplish in order to make this an enjoyable film.

This film is an adaptation of the original play, one that ran for a very long time during the war itself. It must have been so shocking for people at the time, to go see a play which is so cavalier about death while people were dying all around them.

Still, I think that might have been like a breath of fresh air; laughter is such good medicine for tragedy, it must have felt like a huge relief to not have to deal with the horrors of their everyday lives for a couple of hours, and instead to enjoy something this downright silly. The play had a slightly different ending, however, one that I think better captures the rest of the story, but that wasn’t allowed under the production codes of the time.

I don’t want to give it away, but the original ending was deemed “immoral” by the censors, and so we get the, perhaps less fitting but nevertheless fun, ending that is presented here. All in all, this film doesn’t come close to the highs of a true classic like My Man Godfrey, but it’s still perfectly enjoyable, and downright fun. - Aug 9th, 2014