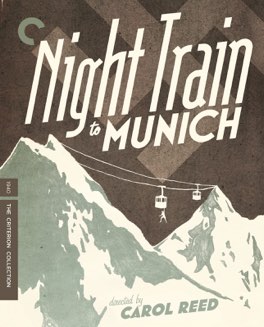 The dichotomy of serious situations and some serious performances with the generally ridiculous undertone makes for a very uneven experience.

I don’t really know what to make of this film, it’s so many contradictory things at once. It’s a comedy. It’s an ominous thriller. It’s serious and yet it’s not. It was made by Carol Reed, off a script written by the same people who made The Lady Vanishes, also takes place largely on a train, it features the same leading lady, Margaret Lockwood, and the same English travelers, Charters and Caldicott, but it has a completely different vibe.

A lot of this confusion, I think, comes from when the movie was made. Unlike The Lady Vanishes, or Foreign Correspondent, this film came out after the world was at war. Because of that timing the Nazis are openly the enemy rather than just being hinted at. However, because the movie came out during the period knows as the “Phoney War,” the time before France was occupied and England was attacked, the Nazis are treated naively and comically.

The film opens with a scene in a concentration camp, and the worst of it is that people are being given lashes for laziness and are not allowed to talk. It’s hard to watch that from the present and not think about just how wrong the filmmakers were about what was really going in Europe. The Nazi officers are presented as comic figures, they argue over what name is on Rex Harrison’s letter of introduction, make jokes, and just generally bumble about. But then, Paul von Henreid plays his role as a Gestapo agent totally straight and is legitimately somewhat scary.

Perhaps that’s why the film is so confusing. At least in To Be or Not To Be we know it’s definitely a comedy. The whole point of that film is to poke fun at the Nazis and the war and the world and it does it well. Here, we aren’t sure. Is this meant to be a serious thriller? Were the writers and Carol Reed just that naive? Is it secretly just a very weird comedy? I don’t know. What I do know is that I’ll watch it again, because even with all that this is a very good film. I’ll watch it again and try to figure it all out. - Mar 16th, 2014