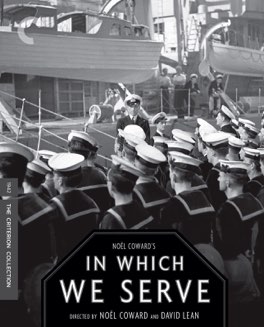 In Which We Serve

An impressive look at the lives of the crew of a World War II destroyer. This film goes far beyond the propaganda it was clearly intended to be and creates something timeless and special.

This film begins with the line “This is the story of a ship…” and that’s exactly what it is, but it’s also a great deal more.

The ship in question here is the HMS Torrin, a British destroyer which we see being built as the film begins. She’s captained by E.V. Kinross, played phenomenally well by the writer/director of this film Noël Coward.

The story starts with the building of the ship and then immediately switches to her final mission. After being sunk by Nazi fighter jets we see some of the crew make it to a nearby lifeboat. From that point on the film switches between various flashbacks of the home lives of the crew, the missions the ship undertook, and what’s happening on the lifeboat.

I found myself shocked by how touched I was by the lives of the family of the various crew members that we see in the flashbacks. I’ve been watching a lot of films about World War II lately and they always focus on the soldiers and the war itself. This is a different take.

By focusing on the lives of the crew and their families, who are living through the war almost as intensely as the soldiers are, it really brought home to me just what that time period was like. The fear, the constant danger, the desire to move quickly with things like marriages and babies. It was as if the world might end at any moment.

The acting here is uniformly great, and the cinematography is wonderful as well. The staging of many of the scenes is basically perfect. There are many wonderful moments throughout this film, but I think my favorites are the various times the captain addresses his crew. These are scenes of intimacy and respect, but also of resolve and strength.