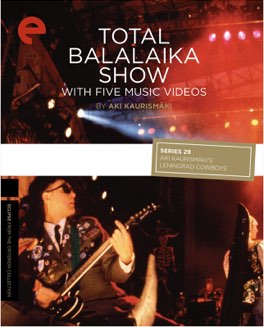 I suppose it makes sense. The only parts of the last film I enjoyed were the songs, so this was way more fun to watch.

In my essay on Leningrad Cowboys Go America I wrote about the magic that it took to materialize this band. Like Spinal Tap before them, the Leningrad Cowboys transcended their parody identity to become the very thing they were initially making fun of. They manifested themselves into this plane of reality, with the help of Aki Kaurismäki.

This film is the final demonstration of that magic. This is a concert documentary chronicling a show the band played with an ex-Soviet orchestra in a display of post-Cold War unity. The concert was in Helsinki and apparently more than 70,000 people were there. It looks like it, the crowd is absolutely massive. 70,000 people in a real place to listen to a fake band. I keep harping on it, but only because I find it so absolutely incredible. - Sep 11th, 2021