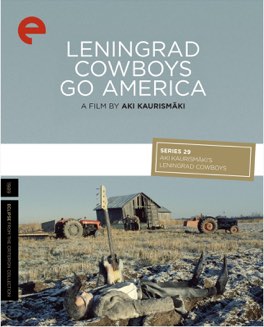 I found this film more charming than funny, but I still greatly enjoyed it. If nothing else, I find the entire idea of it fascinating.

I don’t have all that much to say about this film. It’s hilarious, but not exactly funny, if that makes sense. It’s more absurd than anything else really, and it’s so absurd that it even made manifest its absurdity in the real world. The Leningrad Cowboys are a real band. They play live shows in the real world. Yet still, this film is not a documentary. It’s a magic trick. It’s a bit like A Hard Day’s Night in that sense, only if The Beatles had come into existence because of the success of the film.

It’s a case study in the ability of surrealism to shape our reality. Much like This is Spinal Tap, only with less determination or mission. That’s an intentional psuedo-documentary, but what’s this? It’s a narrative film, about people who were real when the film was made, but not as the people they’re playing. This film made them real, which is the kind of magic we should all be very intrigued by. - Oct 25th, 2017