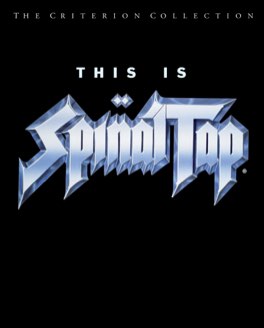 I get why this film has achieved cult classic status, but it didn’t affect me nearly as much as it would have had I seen it years ago. Not a bad film by any stretch, but not one I would watch again.

This is Spinal Tap

There are some films that I’ve always thought you need to see at a certain age or they risk being lost on you. Empire Records is a great example of this phenomenon. It’s not a good film, at all, but I saw it when I was fourteen and so I’ll always love it. Then there are other films that were hugely original when they came out, but have since been referenced to death, and so if you missed the window you probably won’t be as strongly affected by them. This film suffers from both of those problems, and I’m seeing it for the first time in 2014, at the age of 33. As a result I can’t say that I loved it, or even that I really liked it all that much.

The jokes fell mostly flat, exactly for the reason that I’ve already seen them referenced about a billion times in other films and sketches. The idea of a mockumentary, which was popularized by this film, no longer has the same originality, and so this seems like a much more basic version of better things that have come since. Having said all that though, this wasn’t a total loss. The film has a surprising amount of heart, and there were definitely some laugh out loud moments. So, while this film won’t become a cult classic for me, I did enjoy it and I’m glad I’ve finally seen what everyone has been talking about for basically my entire life.

The plot follows the five members of the aging British titular rock group, who have been together in some form since the 50s, as they embark on their latest North American tour. Their popularity has waned significantly in recent years, and where they were once playing for 15,000 people a night they are now lucky to get 1,500. As they travel around the country they get into a series of escapades that illustrate how far they’ve fallen, but they’re still fully committed to a stereotypical rock star lifestyle. They travel around from city to city, wondering when their new album will come out, and trying to continue on as they’ve always done. Eventually the lead singer’s girlfriend shows up and we get a sort of Yoko Ono situation where things really come to a head. The film is essentially a fake documentary of what failure looks like, with, ultimately, a surprisingly redeeming end.

What saves this film from being a total waste on me is the humaneness of the various band members. These aren’t jerks who happen to be famous, but rather deeply misguided, but fundamentally decent, human beings. The portrayal of these aging, and extremely out of touch, men, who have been doing nothing but play music professionally since they were teenagers, is the most interesting part of the film for me. The back story they construct for the two main characters is clearly a reference to Paul McCartney and John Lennon, but in a sort of alternate universe where they never broke up. It’s a look at a friendship that’s 30+ years old and it’s extremely touching. It’s also fascinating to watch these two fake versions of McCartney and Lennon, and wonder what the real Beatles would be like, if they were still together today.

The other thing I appreciated about the film was its lack of over the top absurdity. I think that if this same film were made today, it would be about ten times more ridiculous in every detail, and that that would actually harm the film. The pacing felt much closer to real life that a modern film would attempt, and the conflict, while clearly exaggerated, isn’t anything you couldn’t see on a particularly crazy Behind the Music. Because of this, the characters come to life in a way they just wouldn’t today. The modern version of this would be Jack Black style, and there would be very little redeeming humanity to the story. As it stands, even though the jokes felt dated and flat, this film made me smile, the ending legitimately made me happy, and there were actual thoughtful moments throughout. - Nov 11th, 2014