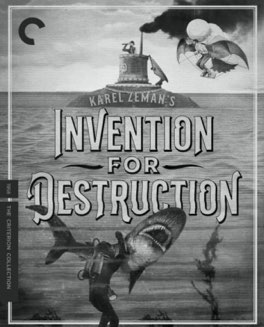 A truly remarkably beautiful and masterful looking film, but another absolute snoozer of a story. What a shame.

This film is like the most beautiful cabinet, or closet, or drawer you’ve ever seen, with absolutely nothing inside it. Or perhaps it’s better said that it’s intricately carved, but on closer inspection so fragile that you could knock it over with a breath of air. An empty shell, but one made so brilliantly, and with such sublime attention to detail, that you almost don’t notice that there’s no substance.

What I’m inarticulately attempting to say is that this is one of the most stylish and perfect looking films I’ve ever seen, but with absolutely no story, or message, or point, to hang it on.

A bit like Last Year at Marienbad, but without even that film’s inscrutable attempt at meaning. I may not have been able to decipher it, but I believe there was something there to find. This is... just cool looking. Karel Zeman was an absolute master of style, with a design aesthetic that I love completely. It’s just a shame that he never found a partner to provide these unreal technical abilities with the other part of what makes a good movie, a story.

The film follows a steamship pirate who has kidnapped a professor and his assistant, and is tricking the professor into building him a gun. Typically when I write summaries of these films I try to craft them to let you know everything you need to know to understand my comments, and enough to intrigue, but nothing more. Here I don’t have that problem because that’s almost literally the entire story. There’s a “rescued” lady involved, but that’s about it.

I was so hoping that my feelings about Journey to the Beginning of Time would be an aberration. That I was simply at the beginning of Zeman’s career, and that his storytelling abilities had simply not caught up with his boundless artistic vision. I’m still holding out some small hope that remains the case, but this film is not an encouraging sign. - Jun 16th, 2020