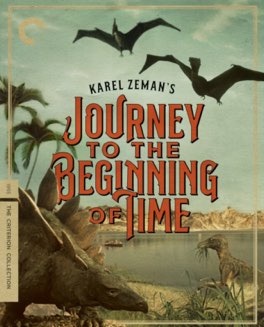 This was boring, which is the last thing I would have imagined I’d be feeling right now. Wonderfully inventive visually and a snooze fest in every other way.

Journey to the Beginning of Time

I really expected I was going to love this film. I didn’t know that much about it, other than what the packaging of this set was telling me. What I had gathered was that this was a film that used incredible practical special effects to create an impossible world. Also, the box set it comes in is also a popup book, and who doesn’t love a good popup book?

As it turns out, expectations remain a fickle friend. I did not enjoy this film very much at all. What prevented me from enjoying it wasn’t those cool special effects, which are really remarkably wonderful. What prevented me is a far more pedestrian problem; the film is boring.

The story lacks any real conflict, moves at a glacial pace, no pun intended to those who have seen it, and goes basically nowhere. As it turns out, all the inventive special effects in the world can’t make a boring film exciting or interesting. Those special effects are truly wonderful though, and have me feeling very hopeful for the other two films in this set.

This is an early example of the work of director Karel Zeman and the special features have me believing that what lies ahead cannot possibly be described as boring. Part of the journey I’m on, to the beginning of cinema history and back, is that I’m sometimes watching work that is only interesting for what it tells us about the career of its creator.

This seems to be one of those times. At least I got to see an incredibly cool wooly mammoth! - Apr 17th, 2020