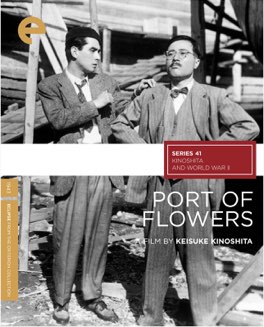 An entertaining diversion, with a silly plot that I thoroughly enjoyed. This is not a masterpiece, but still a very enjoyable first film.

It’s an interesting thing. Because of family reasons I’ve previously discussed, my interest in World War II has almost always concerned only the European side of things.

I’m certainly aware of the general facts of the war against Japan; Pearl Harbor and the dropping of atomic bombs for example. I’ve simply never put the same kind of attention and effort into the subject though, and so this film is my first exposure to Japanese cinema made during the actual war.

The film tells the story of two confidence men who come to a Japanese island, to independently attempt to pull off the same scheme. Recognizing their overlapping interest, they join forces almost immediately.

The con in question is to convince the island’s denizens that they are the children of a late merchant, who had left many years earlier. They raise money from the locals to fulfill his last wish, that of building a shipyard, with the intention of running away with the cash.

As their plan spirals out of control the war with the USA and England begins, and things really fall apart.

This film was Kinoshita’s first to make it into production, but not the first he wrote. That film was deemed not patriotic enough by the censors, and so for this one he makes sure to lean in. It’s fascinating to see the characters describe their patriotic feelings about the war effort, and the Empire of Japan.

They come off almost exactly like the patriotic characters in western wartime films from this same era. I’m always astounded by how similar people are around the world, and how little I recognize that until confronted with it. These people are simply rooting for their country, and have no notion about what’s actually going on.

I also really enjoyed the plot conceit of a couple of small time frauds who get so afraid at the accidental scale of their crime. They are simply not prepared to actually go through with their endeavor, and it’s utterly charming to watch them try, and fail, to get themselves out of their situation.

Their fraudulent scheme succeeds against their wish, and the whole thing resolves in about as comically satisfying a manner as I could want. It must have been so refreshing to see a film like this, in a time of chaos and war.

One that presents the world as nicer, and simpler, than anything people were actually experiencing. - Nov 1st, 2016