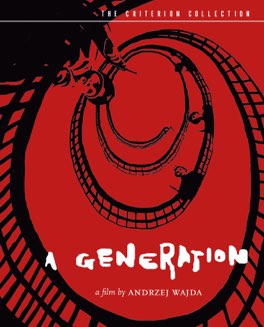 A fascinating look at a lost generation of Polish youth. This is a wonderfully expressive film, which showcases resolve and hope in a time of despair.

As someone with a love of history, as well as someone who has family history with the Holocaust, this trilogy of films from director Andrzej Wajda has been calling to me for quite some time. It’s one of the best parts about watching all these films; getting a glimpse into the history of a time and place you might otherwise know nothing about. This film, the first in his Three War Films trilogy, is a fascinating example of that chance. Each of the films in the trilogy focuses on one of the major moments in the history of the Polish resistance movement during WWII. This one on an event of particular interest to me, that of the Warsaw Ghetto Uprising.

The film follows two young men that are living around Warsaw, in occupied Poland. The first Stach, has been raiding Nazi coal trains as they travel through his village. When a friend of his is shot and killed during one of the raids he decides it’s time for a more honest job. He ends up working as an apprentice in a factory making war materials for the Nazi army, and while there he meets one of the leaders of the communist side of the Polish resistance. The other young man is Jasio, who was an apprentice at the same factory, but with the arrival of Stach has been promoted to Journeyman. His father fought for the Czar in WWI and requires significant medical care, and so the son is reluctant at first to join any kind of fight. Eventually both sign up for the resistance, and the rest of the film follows their activities, and their consequences, including helping to rescue Jewish survivors of the Ghetto uprising.

I have a particularly personal connection to the events of this film. My great-grandparents were Austrian Jews, but were deported in April 1942, as part of Operation Reinhard, to a ghetto in Izbica, Poland. They were eventually sent to the Majdanek concentration camp and murdered. While they weren’t in the Warsaw Ghetto during the uprising, I was still captivated by this film’s portrayal of a related event I didn’t know much about. I couldn’t help but think of them, and their lives during this period, while watching the film. Seeing it all play out, with the knowledge that their experiences weren’t wholly dissimilar, I was inspired to learn more about the event itself, as well as more about the Polish resistance movement as a whole.

This film shows two of the main factions involved in the Polish resistance. The largest group were the Home Army, which were loyal to the Polish government-in-exile, and mostly capitalistic in nature. The second group, the communist People’s Guard were much smaller, but better armed. The film portrays the People’s Army as being the “good” group, and the Home Army as being somewhat negative. This is mostly due to the timing of the creation of the film, which was during the Polish People’s Republic, a satellite state of the Soviet Union. The censorship laws of the time meant that the communistic People’s Army had to be favored over the capitalistic Home Army.

The story takes place around the time of the Warsaw Ghetto Uprising, which happened in the spring of 1943, as the Jewish community of the ghetto became aware that the people being taken away weren’t being sent to labor camps, but were being exterminated. The unrest began in January of that year, as the community began to revolt against their oppressors, and culminated with the Nazi army of the area coming into the ghetto to finish them off. Eventually the Nazi commander ordered the ghetto burned, block by block, and more than 13,000 Jewish inhabitants died, many of them burnt alive. The film shows this incident from the sidelines; as a burning ghetto in the distance, with a Nazi-erected fairground in front of it, designed to distract the non-Jewish population.

There is some debate as to how much the non-Jewish Polish resistance movements helped the Jews who were fighting, but it seems clear that at least some of them did, and in particular the People’s Guard that Stach belongs to was one of them. They helped get survivors out of the ghetto, many of whom then joined the larger Polish resistance. None of this history is in the forefront of the film, which focuses more on the journey of the two young men, but it’s all there in the background. What I’m so happy about is that seeing all of this inspired me to start reading, and to learn more about these events that I was only peripherally aware of. I’m looking forward to watching the next two films in this trilogy, in the hopes of learning even more. - Feb 6th, 2016