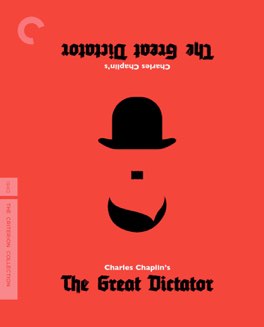 A film that both upset and delighted me, sometimes in the same moment. This was a hard one for me to process, but I recognize the genius of craft, and audacity of intent, that it represents.

I want to mention a few things before we begin. Some of this I already alluded to in my entry on Army of Shadows, but I think it requires repeating before I jump into my thoughts. I’m Jewish, and my mothers family experienced the Holocaust first hand. My grandfather was put in Dachau, which he escaped from. His parents were killed in Majdanek. My grandmother was prevented from attending school, her family was forced to give up all of their belongings, and her mother was almost killed during Kristalnacht. Many other members of my extended family were either killed, or deeply personally affected by the war. My experience of this film was obviously heavily influenced by my understanding of their lives.

The film, which was Charles Chaplin’s first full “talkie,” follows his adventures as both a Jewish barber in the ghetto of a made up country called Tomania, and as the ruthless and anti-semitic dictator of the same country, Adenoid Hynkel. The two narratives run parallel to each other, and for most of the film the only mention that the two men so closely resemble each other is a note at the beginning that that resemblance is purely circumstantial. The film follows Hynkel’s attempts to conquer the world, while also persecuting and murdering the Jewish people of his country. At the same time it follows the barber, as he attempts to rejoin society after losing his memory in WWI while saving the life of a fellow soldier. Eventually the two stories cross, and lead to one of the most memorable moments in cinema history, when Charlie Chaplin drops character and directs an appeal for peace and tolerance to the audience.

Other than that appeal, the story is mostly played for laughs, as one might expect from a Chaplin film. That’s where I found it extremely hard to wrap my mind around. I’ll start with an obvious point though, just to make it clear, this is a masterpiece of comedic filmmaking. It’s full of wonderfully funny and sweet moments. It’s also a valiant endeavor at using comedy to attack the evil of the Nazis. I absolutely recognize the insane degree of difficulty inherent in even attempting this film, and I’m impressed by how successful that attempt is. At the same time, I found the film to be extremely unsettling, and it isn’t hard for me to figure out why. To start with, I just don’t find it easy to laugh about the Nazis. Much like with To Be or Not To Be, or Night Train to Munich, I’m not likely to ever be in the target audience for a Nazi-themed comedy film. The reality of the history is simply too close and painful for me.

That’s not news of course, I mentioned something similar in my entries on both of those films. There was another factor at work in this film, however, one that came as more of a surprise to me. It has to do with the power and charisma that Charlie Chaplin had, that he had already built up in me with the other films of his I’ve seen. I love Charlie Chaplin. I love the films that he made. His is an on-screen persona that’s almost totally pure. The Little Tramp character is the everyday underdog, always getting pushed down by the bullies of the world. I find myself rooting for him implicitly, from the moment I see him. To have someone who looks exactly like that character portray the evil that was Hitler was very hard for me to watch.

Chaplin essentially gifts his Hitler parody, Adenoid Hynkel, with a large portion of the goodwill that I’ve given him in general. I found myself almost rooting for Hynkel, feeling for his troubles. To be even somewhat enamored of a representation of the man who represents the destruction of my own family wasn’t a pleasant experience. At the same time I enjoyed parts of the film immensely, and the mixture left me full of confusion, unsure of what to say or how I felt. I’ve sat with that feeling since I finished watching the film, and the conclusion that I’ve come to, is that while I appreciate what Chaplin was trying to do here, I suspect this won’t be a film I return to very often. It’s just too hard for me to watch it without feeling unclean. - Oct 6th, 2015