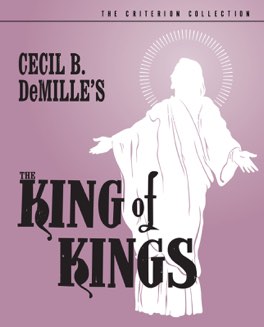 A lovingly over the top telling of the story of Jesus by one of histories most impressive auteurs of epic filmmaking. I had some issues with this film, but overall I definitely enjoyed it.

The King of Kings

In what will probably become a trend when I write about films that are intimately concerned with Jesus, I’d like to make an upfront confession. I’m Jewish, and not only am I ethnically/racially Jewish, but I was also raised fairly significantly religiously Jewish, something that I continue to associate with to this day. So, my thoughts about a film attempting to tell the story of the gospels of Jesus are going to differ from that of those who are more connected to them. Having said all of that, I’m sure you’re all shocked that I have some thoughts about this film.

That it’s a sprawling epic is not at all surprising. Cecil B. DeMille was famous for his roadshow pictures. He loved the splendor of far too much and this film is an overwrought mess at times. This was also certainly not the first feature film to recreate a biblical story. DeMille’s own The Ten Commandments, for instance, predates it by 4 years. This isn’t even the first film about Jesus, From the Manger to the Cross came out in 1912. What we have here then, is a perfectly pleasant take on the story of Jesus, made by people who were clearly extremely sincere in their purpose.

It’s a lovely film at times, full of a clear reverence for the gospels, and also a dedication to the art of filmmaking. The grandeur of the film is hard not to smile at. From the moments of super early Technicolor, to the absolutely ridiculously over-the-top climax of the crucifixion, this is a film made with attention to detail. It’s full of incredible sets and a serious sense of place and purpose. And the acting is as earnest and intentional as the rest of the filmmaking. Particularly, I found the job that Joseph Schildkraut did as Judas to be especially notable.

I do have some problems with this film though. The first has to do with the treatment of Mary Magdalene. The film has the novel idea to start the film with Magdalene dating Judas, and annoyed that he’s been taken from her by Jesus. She’s dressed incredibly provocatively for the time period, and demonstrates a powerful level of personality and strength. She heads out to find out what’s keeping Judas from her, and immediately upon meeting Jesus she finds her inner demons in a war with his holiness, for possession of her soul.

Up until this point I think it’s all great, the scene where her demons come out to fight his gaze is one of the best in the film. What I didn’t enjoy though, was that once Jesus has cleansed her, she immediately covers herself and becomes a model of female subservience. The idea that her cleanliness was tied to her being demure, as opposed to the dynamic self we initially encounter, was extremely disappointing to me. As always, I don’t want to spend too much time judging art from the past by modern standards, but man what a waste of a chance to do something great and powerful.

The other area I didn’t particularly enjoy was the treatment of the trial of Jesus. The film presents the story of Pontius Pilate, the Roman Governor, asking the people to choose between crucifying Jesus or Barabbas the Murderer. And of course, after being bribed by various members of the priesthood, the Jewish people in attendance seem to choose Barabbas to be saved. This is part of the Passion Play that has been reenacted in Christian communities for centuries. The problem I have is that this has also historically been used to promote hostility and violence against Jewish people by making them responsible for the death of Jesus. The film actually attempts to handle this with some sensitivity, and my complaint is more general than specific, but it definitely made these scenes harder for me to watch. On the whole though, this was a decent enough film with some really cool special effects. - Jul 2nd, 2015