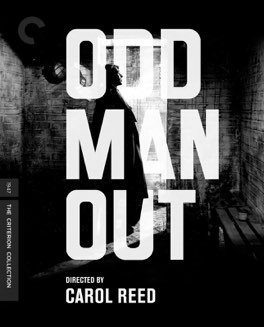 Ultimately, I was a little bit underwhelmed with this film. It’s not bad, there are some nice moments, and some beautiful cinematography, but I was hoping for another Third Man, and this isn’t it.

This was the first film set in Northern Ireland that I can find any reference to.

I find it therefore fascinating that, while it’s a film that uses the conflict between the IRA and the British government as its backdrop, it’s really not about that conflict specifically. The issues that this film is trying to grapple with could be examined through the story of virtually any similar situation in the world.

The opening crawl of the film makes this explicitly clear, this is a film that isn’t concerned with the struggle between these two powers, but rather with the conflict in the hearts of people who become unexpectedly involved.

The story follows one day in the life of Johnny McQueen, who is the local “organization leader”, the IRA is never explicitly mentioned in the film. It begins with Johnny and his cohorts planning the robbery of a mill, in order to secure much needed funds to continue their violent uprising against the protestant British government.

The robbery goes off alright, except that Johnny, newly escaped from prison and not really prepared for this sort of action, is shot in the shoulder by a security guard. In the scuffle he accidentally shoots and kills the guard. He spends the rest of the film being helped and hindered by various people he meets, avoiding the cops that are everywhere looking for him, and trying to wander his way to some kind of safety, while slowing dying of blood loss.

The film spends no time considering whether Johnny’s actions are noble or not. The story is unconcerned with the complicated moral arguments that could be made, about the police and their actions, and the organization and theirs. Instead, what the film is interested in, is an examination of the plight of the regular people who are unlucky enough to have Johnny stumble into their lives briefly.

I think that if you’re living in a place that’s consumed by armed conflict between opposing factions, and you yourself are not a part of any of those factions, this is the response that most of us would take. Some would help Johnny as best they could, without getting themselves involved. Others would hinder Johnny, also as much as they could, without actually getting involved.

The film does an excellent job of presenting these ideas without hammering you over the head with them. You could absolutely watch this film for the adventure aspects of Johnny’s attempted survival. You could also focus on the humor and interest of some of the characters he encounters. Or the love story that never really quite develops between Johnny and a young lady friend looking for him. Or you could watch what the effects of his actions are having on the city he is supposedly fighting for.

Both good and bad things, as people mobilize to help him, while the police make everyone’s lives more difficult. All of that is handled very matter-of-factly, which gave it far more interest to me than if they had been more explicitly attempting to make the point. It made for interesting viewing and something to think about. - Nov 26th, 2015