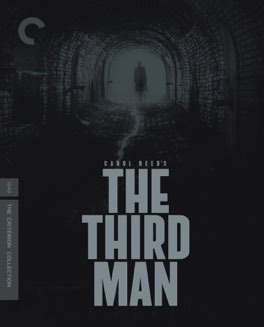 What a film. What an incredible, unforgettable film. I’ve been avoiding watching it, knowing that I would almost certainly love it, want to own it, and spend far, far too much money on it. It’s been out of print for quite a while now, the Criterion version anyway, and it fetches a ridiculous amount of money. But now I’ve seen it and, indeed, I need to have it. It’s that great

The incredible acting, the skewed camera angles which say so much about the skewed story, the shadows and the scenes of post-war Vienna. It’s all absolutely perfect. From the opening notes of the zither soundtrack I was hooked. I’m a sucker for pulp mysteries and this one is one of the best I’ve ever seen.

Orson Welles is one of my favorite actors and he’s great here. Even though he’s not in much of the film, really only a couple scenes, his presence is constantly felt. And when he does finally show up he steals the whole picture. The speech where he outlines his world view, which he supposedly wrote on the spot when they needed an extra line, sums up the entire thing for me. The way people in those divided cities did whatever they had to, to survive, and the way people with no scruples took ruthless advantage. It’s quite the message and very few actors could deliver it like Orson did.

As he says when he finally does show up: “You know what the fellow said – in Italy, for thirty years under the Borgias, they had warfare, terror, murder and bloodshed, but they produced Michelangelo, Leonardo da Vinci and the Renaissance. In Switzerland, they had brotherly love, they had five hundred years of democracy and peace – and what did that produce? The cuckoo clock.”

This could be the entire content of a master class in noir film making. Carol Reed, director of the silly Night Train to Munich, here, with much darker source material, created a masterpiece. A statement on post-war European life, on the beginning of the cold war, on human nature, and on love. - Mar 10th, 2014