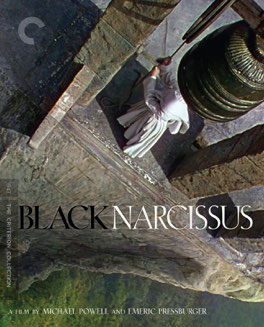 Another wonderful film from Powell and Pressburger, who are quickly becoming some of my all-time favorite filmmakers. This one is a bit looser than some of the others, but just as wonderful.

That this is a visually stunning film is not really all that surprising. All of the films by The Archers that I’ve seen have had that element to them. It is incredibly impressive that such a brilliantly beautiful and striking film, which depends so heavily on its sense of place, was made entirely in a studio. What I found really interesting about this film wasn’t the visuals though, or rather wasn’t just the visuals. Instead, it was the interesting take this film had on ideas of spirituality, and of the natural world as a sort of potentially psychologically damaging force.

The film follows the story of an order of Anglican nuns who have recently been invited to build a new cloister in a remote part of the Himalayas. The sisters have been warned that it won’t be easy, but are determined to make it work. An order of monks even tried the previous year, and lasted only a few months. The sisters are given an incredible castle, at the edge of a cliff, which was formerly used as a harem. As they attempt to set in, they are overwhelmed by the vastness around them, and by the wholesomeness of nature. Their order believes in spirituality through hard work, through connection with their environment. In this incredible place though, that causes them to get lost in their memories and desires, and ultimately leads to an intense and almost horror film like ending to their attempt.

This idea of the purity of the place around them having an overwhelming, and negative, effect, is fascinating. That isolation, clean air, and beautiful vistas, could lead to distraction and chaos, rather than peace and contemplation. Instead of being compelled to seek a greater balance between themselves and nature, the nuns are driven inwards, to their own darkest places. The film presents this brilliantly, even going so far as to have a local holy man who is always meditating, to show the connection to spirituality that the nuns are so lacking in. The film this most reminds me of is the Norwegian thriller Insomnia. Both films are concerned with presenting the idea that something we usually see as a positive, in Insomnia light, in this space, can actually be a negative if taken in too concentrated and sudden a dose.

I’ve seen it written that this film is painfully out of touch with modern ideas of diversity and culture. Those people are completely right. Like much of western media, then and now, this film presents a ton of stereotypes, along with a cringe-worthy use of non-native actors to play native roles, that are naively well-intentioned at best. This is a problem for so much art that I tend to just sort of deal with it. Not overlook it mind you, but I simply try very hard not to let it distract me from whatever the filmmakers were intending to achieve. And in this film, I do think that Powell and Pressburger were naively well-intentioned in their depictions, rather than coming from any kind of hateful place.

In many ways the film presents the idea that these nuns are disconnected from any kind of spirituality. They are almost entirely concerned with the day to day running of their hospital and school, and of the effect the world around them is having on their minds. Sure, they spend time in the chapel praying, but they’re clearly not engaging in any kind of larger contemplation. These are nuns as social workers rather than nuns as spiritual leaders.There’s nothing wrong with that, of course, but it does make me wonder about the point that Powell and Pressburger were trying to make with most of the film. By the end we devolve into a purely fun horror type setup, but the early parts of the film do appear to be about something. I’ll need to watch this one a few more times to put it together perhaps, or at least to enhance my understanding of it. It’s a project I look forward to. - Sep 28th, 2015