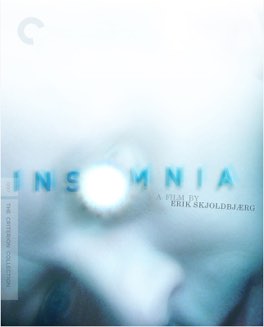 An interesting film, that nevertheless doesn’t quite manage to completely shed its original boilerplate premise. A lot of ideas that ultimately don’t come together to be greater than the sum of their parts.

What a harrowing experience this film was, so intensely unsettling, and uncomfortable to watch. It uses its fairly conventional plot, seen in so many late-nineties crime thrillers, as a jumping off point to present some interesting ideas about the nature of guilt, and of sleep deprivation. The plot itself becomes unimportant to the point of this film, its simply an engine used to drive the style and ideas around. And on that level the film succeeded, although I can’t say I loved actually watching it.

As I said, this is presented as a straightforward crime thriller, at least story wise. The plot focuses around a murder in a small Norwegian town, and the Swedish policeman who has been sent to investigate it. We get plenty of the usual police procedural things, all the reveals and twists, but honestly the plot of this film was eminently forgettable to me. Even the identity and motive of the killer were of little lasting interest, or of much importance to my thoughts about this film.

What I found compelling was the setting, and the way that setting was used to provoke the main character, in unexpected ways. In the story, the Swedish detective, played brilliantly by Stellan Skarsgård, is sent to a town in Norway that’s miles above the Article Circle. And, he’s been sent there in early Summer, when there is essentially no night. This lack of night, the entire film takes place in one endless day, and its effect on Skarsgård’s character, is what makes this worth examining.

Instead of a typical noir, a film that lives in darkness, this one lives entirely in light. Light in film is almost always related to safety, but here it’s presented as equally dangerous to darkness, as something to be feared and respected. Skarsgård’s character, who we immediately see is perhaps a bit unhinged to begin with, spends the entire film essentially not sleeping. An early incident adds a secret to be kept, and some serious guilt surrounding it, and the concoction of feelings and tiredness create a character who is almost completely unhinged for most of the story.

What we get is a surprising level of moral ambiguity to the story, where the lead character is almost as loathsome as the people he’s ostensibly attempting to bring to justice. Skarsgård plays this aspect perfectly, his detective is cool, but also clearly not someone you would actually want to be, or to meet. He has a brutality about him, and a willingness to do horrible things to protect his secret. It combines with his desire to get the hell away from the endless day, and causes him to do some pretty unspeakable things himself.

This is not a typical good versus evil story, although at first it really seems like it will be. It doesn’t take long until it sheds those tropes though, and instead attempts to examine something more interesting, and less straightforward. Most notably, it has a resolution that does such a good job of avoiding the moral platitudes that we demand from our media, that when it was remade for an American audience by Christopher Nolan, they tacked on a more straightforward ending that allows for our cultural need for “bad people” not to profit from their misdeeds. This film completely avoids providing that unconscious comfort, and as a result creates a much more unsettling experience, but at least one that’s somewhat interesting. - Mar 7th, 2015