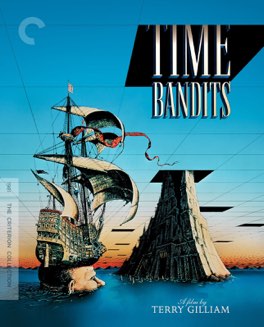 A disjointed film that can’t make the most of its promise. Still, it’s full of hilarious and inventive scenes, which are entertaining even if they fail to become more than the sum of their parts.

This was a pleasant little film that I enjoyed watching. Certainly not mind blowing in any fashion, it’s probably another film that I would have had to see at a much younger age to really appreciate. Without any nostalgic ties from my childhood I was left simply with what director Terry Gilliam had actually made. And what I found was a very clever film, somewhat poorly paced and overreaching, with an extremely specific message, hiding in the clothing of kids fantasy. There were moments that I laughed out loud, and there were moments that I felt the film dragged on badly, but I’m still happy I finally saw it.

What this reminded me the most of actually, was George Lucas’ 1988 film Willow. That film I did see at a formative age, and I therefore have an overinflated opinion of its worthiness. This film and that one share quite a few structural elements, beyond the fact that both use dwarves as main characters. They both feature reluctant heroes, a somewhat comical fantasy setting, and a fight against evil. The main difference is that Willow was clearly George Lucas’ attempt to make his own Lord of the Rings film, after the Tolkien estate denied him the rights. This film, on the other hand, is a pure product of Gilliam’s prodigious imagination, and as a result it feels way more authentically interesting, even if I enjoyed it less.

The story here is both extremely convoluted and shockingly straightforward. Our hero is Kevin, a ten-year-old boy living with his parents somewhere in England. His parents are uninterested in him to a comical degree, seeming to only pay attention to their home’s technology and to whatever is on television. One night Kevin is woken up by a knight on a horse storming into his bedroom from his wardrobe, only to disappear through a previously unknown portal in his bedroom wall. Being a precocious kid Kevin decides to sleep with his polaroid camera and a flashlight, in order to snap a picture the next time he’s visited at night.

The next night, after he falls asleep, he’s woken up by six dwarves with a map of all the holes in the universe, that they’ve stolen from the supreme being. They’re on the run and intending to use the map to become international criminals, with plans to rob histories most famous leaders. Kevin follows somewhat reluctantly when the supreme being shows up looking for his map, and chases them all through the portal in Kevin’s bedroom wall. What follows is a crazy journey through a variety of timelines, including Napolean’s campaign in Italy, and the city of Mycenae in ancient Greece. Kevin and the dwarves get into, and out of, quite a few close shaves, and eventually discover what’s really going on.

There are quite a few charming parts of this film, even if the whole thing ultimately failed to come together for me. There is a hilarious subplot involving Michael Palin and Shelley Duvall, who play star-crossed lovers doomed to be reincarnated into failure over and over again. There’s also a great moment with John Cleese, playing maybe the funniest Robin Hood I’ve ever encountered. These scenes are individually great, but the film fails to tie them together in a cohesive way. There were many points at which I was checking the time, wondering when the next plot point would arrive. The film felt about thirty minutes long, and I think some judicial editing might have made a world of difference.

The message here is also not particularly subtle or well done. The point seems to be that technology is evil, and that it obscures us from the small things in life like shrubs and butterflies. Kevin’s parents are evil in the film because they are more interested in money and technology than they are in their son. They watch a game show early in the film hilariously called “Your Money or Your Life,” which is sponsored by an apparently wondrous do-it-all kitchen set. When evil shows up in the form of the films main villain, his primary concern is that the supreme being wasted too much time designing things like trees and slugs, and not enough time making nuclear fission or laser beams.

I say it’s not particularly well done because the film never explains why technology is bad. Certainly Kevin’s parents are twits who should show their child more affection, but that’s not really the fault of their toaster. And while Evil may covet technology, the supreme being is presented as having created basically everything, so he’s not really innocent of complicity in things either. No, the best films about the ills of modern technology, like the Jacques Tati masterpiece Playtime, showcase the problems that technology causes. Even Gilliam’s own follow-up film, Brazil, does a much better job of portraying actual reasons for his distaste of technology.

Probably the best moment of wisdom in the film comes when a character asks the supreme being why evil has to exist. His answer, after only a moment of consideration, is “I think, it’s something to do with free will.” That line sums up better than anything else the points that are being made here, and it takes only a couple seconds to get across. Still, having said all that, this is an utterly lovely film in places. There is a crazy amount of imagination and invention present, two qualities I really enjoy in a film. So, while it ultimately failed to grab me the way it almost certainly would have if I had seen it as a child, I still enjoyed enough pieces that it was a worthwhile experience overall. - Dec 15th, 2014