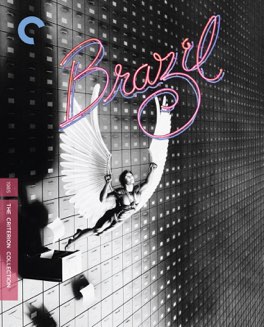 A hilarious black comedy that also has a strong message on the negative effects of faceless bureaucracy. A fantasy based on a logical extreme of our current world, it resonates as least as well as it did when released.

That this film, with its strong presentation of a surveillance state, is often compared to George Orwell’s seminal book Nineteen Eighty-Four does not come as surprising. As it turns out though, it’s a reductive comparison, one that avoids the central themes and messages of the film. It’s a comparison that focuses almost entirely on one part of the how, while almost totally ignoring the why. They are similar, but only at a very surface level. The world that Terry Gilliam so painstakingly created here isn’t completely non-Orwellian, but rather I would say that it uses the same essential elements to make a very different point.

The film takes place “somewhere in the 20th century,” in a society that resembles what would happen if you combined 1940s fashion and ideas about the future, with the most basic technology that 1985 had to offer. It is a decidedly unfuturistic presentation, even for when it was made, combining elements of noir and a semi-steampunk technology. In this world lives Sam Lowry, a low-level bureaucrat with an over-active fantasy life. He works a dead-end job with security; he’s significantly smarter than his boss and they both know it. His only escape is in the fantasy life I mentioned, where he dreams constantly of a beautiful woman, and of himself as the hero who saves her. When a clerical error causes an innocent person to be arrested, Sam meets a real-life version of the woman he’s been dreaming about, and his whole neat-but-boring life is thrown into total chaos.

I’ve always thought that the future would look a lot like the present, only with all the basic elements magnified. Noisier, more impersonal, more dependent on technology, etc.. Gilliam seems to have the same thought, only his view of the present he was living in was a far less kind one that I might have. This is the future as the ultimate representation of the ineptitude of bureaucracy. A society that exists purely according to the rules of paperwork and process, and the supposed order they create. That nothing works properly is simple to understand; it’s not important that things are correct, just that they’ve been correctly filed. It’s a future where human element is almost entirely ignored, where the machines are assumed to be absolutely correct, even as they’re so obviously flawed. Technology as failed answer to everything.

This is where the film so dramatically differs from the scenario presented in Nineteen Eighty-Four. In that book, the system is perhaps even more frightening than the one Lowry exists in, but it’s also incredibly adept and professional. It’s a system of almost total control, and also one that functions as intended, despite its abhorrent nature. The world presented here, on the other hand, is barely functioning at all. No one appears to be in control, we never see even a glimpse into any actual leadership structure. What we see, instead, is a society that follows rules so closely that they entirely ignore how absurdly and comically ineffective they are. This is representation then, not of totalitarianism’s ultimate surveillance success, but of the complete insanity of a society run entirely through bureaucracy. All of the illogically extreme rules that we see being followed can be logically extended from the desires of practically any existing government infrastructure.

What we end up with is a society existing in chaos, pretending it’s order. There are so many explosions in public places, for instance, that the public has come to almost completely ignore them, even as they cause death and destruction. These are blamed on supposed “terrorists,” but it seems equally as possible given the incredibly broken nature of the technology we see, that these are simply the results of shoddy maintenance of basic infrastructure. The only actual terrorist we encounter in the film is a man who fixes bad ductwork without the proper Ministry paperwork, and he hardly seems like the type to be bombing things. On the other hand, in a society obsessed with their supposed necessary control through bureaucracy, what could be more of a threat to the system than someone actually accomplishing things, without filling out the proper forms. - Nov 7th, 2015