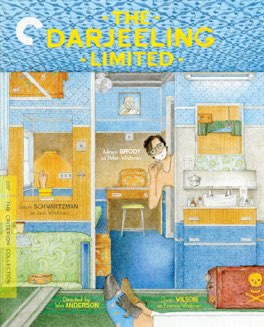 A complex but rewarding film that seems to grow with me every time I see it. Perhaps not the most easily accessible film, but nevertheless an extremely worthwhile one.

This film is Wes Anderson’s homage to the films of Satyajit Ray and Merchant Ivory, and it’s the hardest of his work for me to get my head completely around. His usual theme, that of complicated relationships with family, is still omnipresent here, but modified in interesting ways. Instead of a complicated father, a larger than life character whose children are struggling to relate to, here the relationships are almost entirely sibling based. It’s a subtle change, but it does make for a very different feel to the film than, say, The Royal Tenenbaums or Fantastic Mr. Fox. That’s not to say that I don’t enjoy this film, because I do, it’s just an enjoyment that requires more work on my part.

The film opens with Bill Murray running to reach a train pulling out of the station, the titular Darjeeling Limited, somewhere in India. Murray feels like the main character for a moment, same as he is in The Life Aquatic with Steve Zissou, but we quickly discover that that’s not the case, as Peter Whitman, played by Adrien Brody, runs by him to catch the train, while Murray watches it roll away. Peter meets up with his brothers, Jack and Francis, played by Jason Schwartzman and Owen Wilson respectively. They are booked on the train, traveling throughout India, at the one year anniversary of their fathers death, to undertake a spiritual journey and heal themselves. They quickly begin to bicker and fight, as we learn that they haven’t seen each other or their mother in quite a while. Eventually they get kicked off the train for fighting and bringing a deadly snake on board, and head off to a monastery looking for their mom. All along the way they get into ridiculous situations and attempt, fairly feebly, to reconnect.

The various adventures the brothers go through seem to be attempts at some sort of spiritual healing, performed by people who have no connection to themselves, the people around them, or the world they inhabit. They go through moment after moment where they seem to believe they have been in some way changed, only to discover that nothing has changed at all. It’s very true to real life, we have all had experiences we imagined to be transformative, only to realize later that we haven’t really become something new, that we still have all the same demons in our head that we’ve always had. These three are probably in the extreme, they definitely follow the usual Anderson path of being somehow more and less than real people. But the connection is still there, these are people who are clearly suffering from serious grief, not to mention a strong disconnect with their own emotions. That’s a problem I strongly relate to; I too have headed somewhere I thought would be magically moving, only to realize that I’m only running away from myself. The problem with trying to run away from yourself is that whereever you end up, you’re still there waiting for yourself.

The film itself features all of the usual Anderson wonders. His films seem to be strongly color coded, and this one is definitely blue and yellow. Everything is in a very pleasing primary set of those two colors. The train, the hotels, the taxis, their mother’s convent. The whole world seems to have been created by Anderson, while still being very plausibly India. No details are overlooked; from the way the train looks, to the absurd amount of luggage the brothers carry everywhere, to the box the poisonous snake comes in. It’s all so real and yet so fanciful. Anderson’s worlds are the places I live in my dreams, they are absolutely perfect and lovely. The acting is predictably great, while still featuring the stilted nature of all of his work. It’s endlessly interesting to see, as he has gotten more and more mainstream, how he manages to guide the performances of very well known actors to fit into his larger idea of move making. The new face here is Adrien Brody, who turns in a completely Andersonian performance, he’s probably my favorite of the brothers. As I said at the beginning, of all of the wonderful films Wes Anderson has made this is the hardest one for me. But, it’s also rewarding, and I can only hope that in future viewing I gain even more from this complicated and complex story. - May 17th, 2014