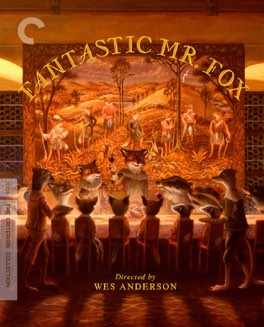 A serious film about the nature of one’s life and fatherhood cloaked in a child’s stop-motion adventure. If you haven’t seen this film you should fix that problem immediately.

What an absolutely perfect and wonderful film. As with The Grand Budapest Hotel and the rest of Wes Anderson’s films, I’m probably not the most objective reviewer. After all, I’m squarely in the target demographic, and I’m basically an obsessive fan. But still, if you like Anderson’s films at all and you haven’t seen this one you are doing yourself a huge disservice. It’s so full of amazing moments and wonderful dialogue, and, although this sounds weird to say of a stop-motion film, unbelievably beautiful cinematography. Freed from the limitations of the real world Wes Anderson creates a more-perfect one, with predictably lovely results.

Loosely based, and I mean very loosely, on the Roald Dahl book of the same name, this film is, ultimately, about the same themes as the rest of Anderson’s work. That is, about a certain kind of father, a certain type of stubbornness. As Mr. Fox says in the film, he needs to feel like people around him think he’s fantastic, and if he doesn’t he starts to feel bad about himself. That one line pretty much sums up Bill Murray’s character in The Life Aquatic With Steve Zissou and Gene Hackman’s in The Royal Tenenbaums as well. These are stories about that kind of father, the same kind as mine incidentally, and the redemption they can find with their families by eventually fixing the things they’ve broken. Here what’s broken is the trust of Fox’s wife, his relationship with a son who doesn’t think his father sees him, and his community who are furious when Fox puts all of their lives at danger.

This film took a very long time to make, and you can tell why. Stop-motion animation is painstakingly difficult work, and this film pays so much attention to detail that it’s mind-blowing. It’s the little things that make this so wonderful, like the way smoke is treated, or the way the camera cuts between shots. It all adds up to create an amazing visual presentation, one which would be ruined by poor voice-acting. Luckily that is absolutely not the case here. The acting is uniformly great, starting with, in my opinion, George Clooney’s finest performance. He captures Mr. Fox with such a precise understanding of the nature of the character. Here we are watching this style usually used for children’s films and instead we’re seeing the real heartbreak and growth of this man, it’s astonishing. Meryl Streep is equally amazing as his beleaguered wife, she presents the perfect counterpoint to his insanity and selfishness. This is also perhaps my favorite role of Jason Schwartzman’s in any of Anderson’s films. I like Schwartzman, but he sometimes has a tendency to use his expressions to sort of nod at the ridiculousness of the situation, something that’s avoided by being just a voice.

I think perhaps the reason I resonate so strongly with this film is, as I said above, the father here reminds me a lot of my dad. My dad is also incredibly cool, and somewhat fantastic. My dad also presents a difficult legacy to live up to, one that I’ve struggled with at times. And, almost exactly like this film, I too went through a long period where I felt like my dad didn’t see me for who I was, and together we overcame it. I have a great relationship with my father now, and I think Ash does too, after this film ends. I’ve heard from a lot of people who aren’t the same level of Anderson fans that I am that they have avoided this film. It looks like a kids film they say. It’s such a shame because nothing could be further from the truth. In this film, perhaps more than any of his others, Wes Anderson distills his message down to its very essence, and it’s breathtaking. - Apr 26th, 2014