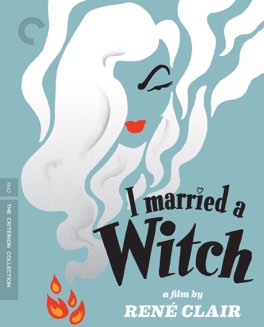 I Married a Witch

A simple and ludicrous film that’s nevertheless unbelievably entertaining. There’s nothing to think too deeply about here, it’s just a shockingly fun film.

This is a stupid and silly film, but it’s just so damn fun. The plot is absolutely ludicrous, full of slapstick absurdity and irreverence.

It’s an extremely flawed film, but it’s a hard one to not fall just a little bit in love with. There just aren’t films being made like this today, any director who wanted to attempt it would be laughed out of the room. It’s pure absurdity in film form.

The story really is stupid. The basic idea is that in the puritan era a man named Wooley denounced a witch and her father and had them burned at the stake. Before the witch was burned she cursed Mr. Wooley, the punishment was that he and all his descendants would be doomed to marry the wrong person. All their marriages would be unhappy ones.

The ashes of the witch and her father are buried underneath a tree, protecting them forever from being released on the world. We flash forward to the “modern age”, in this case 1942, where a freak storm destroys the tree. After being freed from their prison the witch and her father are determined to continue to wreck havoc on the Wooley family, in this case Wallace Wooley, who is running for governor.

After getting a body again the witch is determined to make Wooley fall in love with her, the day before his wedding. What follows is insane and great.

A huge part of the success of this film is the acting. Fredric March is perfect as Wallace Wooley. Strong, a little bit aww shucks, with the perfect amount of straight man in him. He presents the witch, played by Veronica Lake, with the perfect foil.

She torments him and he just keeps falling for it, over and over again. I’m not the biggest Lake fan, she’s really rather an annoying actress, but in this film it works sort of perfectly for her character. But the real stars of this film are Robert Benchley as Wooley’s best friend, and Cecil Kellaway as the witch’s father, an extremely powerful and alcoholic sorcerer. His constant episodes of drunkenness are hilarious.

From what I’ve read this was one of many in the list of films where Veronica Lake’s co-star absolutely couldn’t stand her. The role of Wooley was originally planned for Joel McCrea, but he refused to work with Lake again, after despising her during the filming of Sullivan’s Travels.

The role fell to the aforementioned March, who felt basically the same way about her. The production hadn’t even fully started when he described her as “a brainless little blonde sexpot, void of any acting ability.” She didn’t seem to care much for March either, calling him a “pompous poseur.”

Apparently she tormented him with pranks throughout the filming. But, even with all of that, you really can’t tell. Their chemistry on-screen, perhaps channelling their hate into something useful, is great. Certainly much better than March’s chemistry with his intended bride, the lovely Susan Hayward.

She’s so horrible to him, from the very beginning of the film, that it’s almost impossible to believe they could ever have been engaged to be married. It’s not a perfect film by any means, but any film that prominently features two bottles full of smoke having a conversation is all right by me. - Apr 12th, 2014