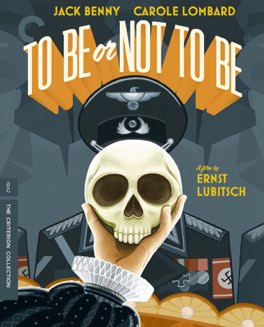 To Be or Not To Be

It’s hard for me to articulate how I feel about this film. It would be helpful if I could go back and see it with the eyes of someone in 1942, in the middle of the war, I think I would have a much different take on it than I do watching it now.

It must have been so shocking for them, so brazen, to see this stuff joked about. In fact, I know it was, the film caused a ton of controversy when it was first released. A lot of people seem to have been quite upset at the audacity of making light humor out of such a serious subject.

Watching it now though, is a very different experience. I can’t say I really liked it all that much, but I’m not entirely sure why. It’s certainly a funny film. Well, more like goofy really, but there are definitely humorous moments, like Jack Benny’s character praising his own acting skills to everyone he meets, even while he’s pretending to be various Nazis and his life is at very real risk should he be discovered.

Carole Lombard is here as well, in her last role before she died in a plane crash, and I loved her in My Man Godfrey.

Perhaps it was too goofy and random for me. There are certain things that I just can’t quite get over, starting with the movie being supposedly set in Poland and yet everyone having an American accent. Maybe I’ve watched too many serious films lately and wasn’t prepared for quite this screwball of a screwball comedy. I don’t know.

I do know that I want to watch it again someday, with a different frame of mind, to see what I might think then. If re-watching The Royal Tenenbaums taught me anything, it’s that context matters in a film experience almost as much as the film itself does.

But... for now I have very mixed feelings. It’s definitely well done, it’s beautifully shot, and well acted. But I didn’t love it. Maybe next time. - Mar 7th, 2014