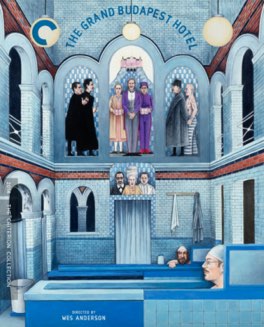 If you like Wes Anderson’s films at all, see this. You will absolutely fall in love, it’s his best movie in ages, and that’s definitely saying something.

I’m still not sure how to talk about this film. I’m a huge, almost obsessive, Wes Anderson fan, so I’m not all that objective.

But man, I loved this so very, very much. It was pretty much perfect. The way he built not just a submarine like in The Life Aquatic With Steve Zissou, or an island like in Moonrise Kingdom, but an entire country. A country full of the little touches that scream Wed Anderson from every detail.

The way everything looks, feels, works, and the attitude and all the dialogue of all the people involved. Just perfect. He directs the way Roald Dahl wrote.

The story here is typically ludicrous. Through multiple eras, starting with a book in present day, all the way to the bulk of the film in the 1930’s, he tells an absolutely incredible tale. Specifically, it’s the tale as told to “The Author”, played by Jude Law, by former hotel lobby boy Zero Moustafa.

The tale is of his mentor, Mr. Gustave H, the former concierge of the hotel. It focuses specifically on his relationship with a very old lady who dies under mysterious circumstances, and the details of her will. From there it heads in about twenty different interesting directions.

What’s also interesting is how aspect ratio becomes a factor in this film. For each of the three eras that are recounted we see a different screen ratio. For the 30’s it’s the old standard 1.33:1, for the 60’s it’s 2.35:1, and for the 80’s and now it’s 1.85:1. This makes the different eras really stand out to me, in each one he uses the ratio most commonly associated with films from that period. It’s a wonderful idea and it works perfectly.

Especially of interest to me, given the films I’ve been watching lately, is his use of 1.33:1 for the 30’s. The 4:3 format that imposes, basically a square, has completely different shot selection needs than a modern movie. It makes those parts feel really timeless and old and adds a great dimension to the story.

In addition, he seems to be paying homages all over the place to the films of that time period. One example that comes to mind is a scene in which two gondolas are passing each other in the air and someone has to jump between them. This reminded me so strongly of the final scene in Night Train to Munich, where the hero also has to jump between gondolas to get safely to Switzerland.

It was just one of many, many similar moments that struck me as relating to those incredible Alfred Hitchcock and Carol Reed films that I love. All in all, it’s basically a masterpiece, and I can’t wait to see it again and find all those little details I’m sure I missed the first time around. - Mar 23rd, 2014