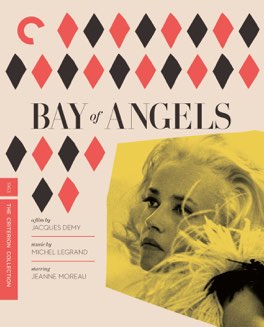 Darker than I was expecting but, ultimately, extremely rewarding. This is a fascinating portrayal of the complex, sweet, and unhealthy love between two addicts. It made me think quite a bit, and as usual that’s enough for me.

This is much darker than Lola, the previous film by Jacques Demy that I watched, but almost as good.

It’s darker by necessity; the topic here is addiction, specifically gambling, but also the kind that keeps two complex people together. It’s a dark film, and yet not. It has that same sense of otherwordly wonder that Lola had, this time centered mostly in Nice instead of Nantes.

It brought me straight to a place that doesn’t exist anymore for certain, if it ever existed at all. It’s a special gift that Demy had to create a world that’s so similar to ours and yet subtly different, mostly in wonderful ways. The hotels and casinos that are the focus here are not nice, they are seedy and low-rent, but they seem kind of luminous at the same time.

The story follows a young banker, Jean, who has never gone gambling because he thinks if he starts he won’t be able to stop. He’s finally dragged along by his bad influence of a co-worker, and, as luck would have it, he wins big his first time out. Immediately he has the bug and decides to run away to Nice, on a gambling vacation, and try to win really big.

Early in his trip he meets Jackie, a former industrialists wife who is also a compulsive gambler. Together they proceed to win big, and lose big, with an almost complete lack of caution or good sense. When they are winning they live the high life, when they lose they struggle just to get by. And, slowly, they begin to fall in love.

Eventually they win really, really big and decide to head to Monte Carlo to the nicest hotel in Europe. Their luck changes almost instantly and, suddenly, they’re faced with a serious choice. They can either continue down this rabbit hole rollercoaster ride forever, constantly switching between laughing and struggling, or give it up and try and go straight.

It’s a film about gambling for money in casinos, to be sure, but it’s also a film about gambling on people. The same risks that Jean takes at the casino he takes with Jackie. A bit like two junkies that find each other, and are completely committed in spite of their obvious issues. Jean and Jackie fight and love and hate and hurt and are really manic in their highs and lows.

It’s not a very healthy relationship for sure, far too enamored of drama and not enough of stability. But that’s their personalities, the same thing that causes them to be sure they should bet the last money they have on a random number coming up. It’s fascinating to watch, no matter what happens they honestly believe their luck is about to change for the better.

They are as crazy and impulsive and reckless in love as they are in everything else, with that same belief in the power of luck. And it’s really sort of sweet, in a completely dysfunctional and non-sustainable way. Ultimately I can’t decide if it’s romantic or insane, and I think that’s the point of this film, that it’s really both.

There’s beauty and sorrow in everything we do, and the difference lies mostly in which we decide to perceive at any given moment.

I really, really liked Jeanne Moreau in Diary of a Chambermaid, and I feel exactly the same way here. She is absolutely magnificent, and in a totally different role. In Diary of a Chambermaid she’s a spoiled but oddly innocent waif, here she’s anything but. She’s a force of nature, a woman who has been there and back and knows exactly what she has to do to survive.

She moves from con to con with the practiced air of someone who has seen things you wouldn’t believe and has just decided to continue living. Her character is so compelling, she dominates every scene she’s in. And yet, it’s not in a way that diminishes the performance of Claude Mann. He’s given a very difficult character, that of the straight man who nevertheless has to seem a bit reckless as well. And he does it perfectly; he’s cool and a bit nerdy, innocent and yet a bit dangerous. It’s a role with an off-the-chart degree of difficulty but he really pulls it off.

Both actors are helped immeasurably by the fact that Jacques Demy chose to film this completely on live sets, no soundstages or anything like that. It grounds the characters in a certain kind of reality, even if it’s one that Demy has modified a bit.

This is such an interesting film, not quite as good as Lola as I said, but really damn close. - Sep 8th, 2014