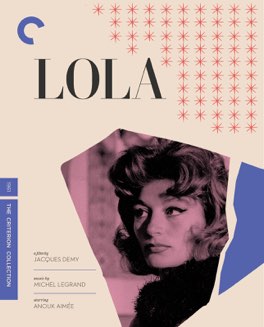 An absolutely magical film, full of wonder and a clear love for its place and its subjects. As a first introduction to the world of Jacques Demy I’d say it was just about perfect.

I’d read that the films of Jacques Demy created a kind of other world, a fantasy world full of romance and light, but I had no idea that it was this magical. This is a beautiful film, full of absolutely delightful things. A bit like the work of Wes Anderson actually, it creates a complete other universe, one that seems like it would be quite delightful to spent a little time in.

Actually the film it reminds me the most of, even though they share virtually nothing in common story wise, is Amélie. What ties them together, for me, is their sense of wonder, and their ability to create a version of France that has never existed in real life. The version that I think we all wish, if we’re romantics and honest, that we could someday live in. It’s breathtaking.

The story here works in segments. Each of the main characters wanders around the city of Nantes, the hometown of Demy, going about their business and randomly running into each other. As they cross paths, mostly at random, they weave the story together, one strand at a time.

That story centers on two characters. Roland, a newly unemployed daydreamer, someone who clearly hasn’t figured out how to live in the real world. And Lola/Cécile, a dancer with a small child who has been waiting for seven years for the only man she’s ever loved to wander back in to her life. Through an absolute chance meeting we learn that Roland and Lola knew each other when they were children.

Roland immediately falls head over heels for her, but she’s still obsessed with the father of her child. Plus there’s Frankie, an American sailor on shore leave, who is also pursuing Lola. And then there’s Madam Desnoyers and her daughter, also named Cécile, who kind of fall in love as a unit with Roland.

These characters wander around each other, figuring each other out, and dancing about. It’s a lovely story really, I won’t give anymore away. The ending especially is phenomenal, full of hope with maybe a little bit of regret thrown in as well. Apparently some of these characters show up again in later Demy films, I have to say I can’t wait to see what happens to them.

This film is focused on a certain kind of love, a kind of love that I used to think a lot about but now think is kind of silly. That’s, specifically, unrequited love. It seems impossible to me that anyone could truly be in love with someone that had no feelings for them back. Love, for me, is so wrapped up in the mutual feelings of my love for someone else, and their love for me.

If someone isn’t interested in me I might stay interested in them, that’s certainly possible, but I don’t think I could ever love them. I guess what I’m saying is that love is something you build with someone else, not something you can direct at someone else. Unrequited love seems like a rather depressing bit of narcissism combined with projection.

People are so different around those that they love, if you’re around someone who doesn’t love you then you’re projecting the person you imagine they would be if they loved you. It can be a very convincing illusion but it’s not fair to think that it represents anything more than a fantasy.

Also it’s so selfish to say you love someone who has no similar feelings for you. Especially if you tell them. What are they supposed to do at that point? You can, and should, tell someone if you have feelings for them, but love? That’s a bit much I think. Anyway, this film examines this idea from quite a few sides.

It does a wonderful job of showing the various effects that these things can have on people, all while never being too harsh on its subjects.

The film itself is absolutely lovely. Demy was clearly smitten with his hometown, and it shows in nearly every shot. Like in Amélie, this probably isn’t Nantes as it actually is, but rather the magical Nantes of the directors memories. We are in a beautiful and perfect vision, one where children can roam the streets without any real fear. One where those with sinister motives are quickly caught and taken away. One where even situations which look absolutely terrifying to modern eyes are simply delightful adventures to be had.

It’s a simpler world, a very lovely world, and one that I really hope exists somewhere. This effect of a slightly different world is achieved through truly wonderful cinematography. Every shot is strikingly well composed, and there are so many little moments of joy with the surrounding architecture and shape of the city. All the people are beautiful, and so well dressed. The streets are clean and ancient, with all the charm of old European architecture.

They mention the war quite frequently in this film, but it’s effects are nowhere to be seen. If the war damaged Nantes, then this version of it, fifteen years later, seemingly bears none of those scars. The acting helps a lot, in creating the kind of feeling that the director clearly wanted to evoke.

Both Lola and Roland are played phenomenally well, and both have difficult jobs to do. Roland must seem polite, interested, and worthy of attention, while at the same time bored, aloof, and clearly wishing he was anywhere else. And Lola has an even tougher job, she has to radiate this creature that everyone around her is captivated by, while still retaining the realness of a mother who simply wishes life wasn’t quite so hard.