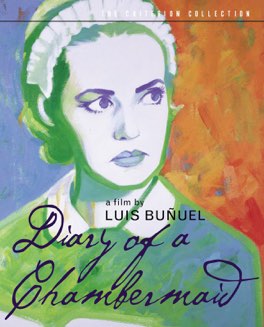 Diary of a Chambermaid

A fascinating look at the burgeoning fascism of 1920’s and 30’s era bourgeoisie France. This film is a marvel, so full of intricate details that need examination.

I bought this over ten years ago, but never actually watched it until today. I’m not sure what I was so afraid of, it’s a fascinating film.

On the one hand, it seems very silly to me that I’ve had it all this time and never actually watched it. On the other hand, I’m not sure I would have enjoyed it much if I had seen it back then. Certainly my attention span was nowhere near long enough to appreciate something at this pace, this is a film that moves languidly through its story.

Also, I think I wouldn’t have appreciated the subtle luridness, I would have been expecting a lot more modern scandal in order to really connect with what is going on here. I’m glad I waited because this really is a very interesting film, even if it’s one that I can’t quite get my mind completely around yet.

Our story follows Celestine, a maid at a great country estate, newly arrived from Paris. She immediately takes a disliking to her mistress, but seems rather pleased with her master’s sexual interest in her. She delights in refusing his advances, but never quite to the point where he stops pursuing her.

Her mistresses father is also very interested in her, but only as a weird stand-in for someone he used to know named Marie, he mostly makes her walk around in leather shoes. The rest of the servants at the estate are of varying degrees of horribleness, especially Joseph, who is a nationalistic, racist, brute. Celestine moves through this world, seeing everything and participating very little.

Eventually, a little girl Celestine is fond of, named Claire, is raped and murdered, and the story begins to gather steam, heading in suspenseful and sinister directions.

It’s an interesting and complex story, working on a number of different levels. The director, Luis Buñuel, liked to focus on the desires and absurdities of the bourgeoisie, something he does very well here. The characters in this film are pompous, arrogant, extremely Anti-Semitic, nationalist, and ultra-fascist. They are all brutal in someway or another, even Celestine, who spends most of the film seeming like a counterpoint to the horrible people around her.

By the end her hands are as dirty as any of theirs, and she has become what she hated the most at the start of the film. It’s a powerful statement by Buñuel, showcasing his thoughts about the rich, and how they eventually corrupt everything around them.

The film is also wonderfully well made. The acting is uniformly great, especially the lead role of Celestine, played by the luminous Jeanne Moreau. She brings the perfect balance of disinterest, charm, sexuality, and intrigue to the part. Everything is also unbelievably well shot. The countryside is presented as great and wide, with lots of space. It all looks so lovely, so in opposition to the scandalous and horrible things that these people are doing in it.

There are many great little things about this film as well. A country priest who advises the mistress that sex two times a week is way to much, while attempting to get her to donate more money. The master eventually realizing Celestine is not to be his and moving on to his homely cook out of sheer desperation. The neighbor declaring the master to be a scoundrel, yet attempting to convince Celestine to frame him for the murder.

They all add up to make a really nice film, one that will require quite a bit more thought over time. - May 10th, 2014