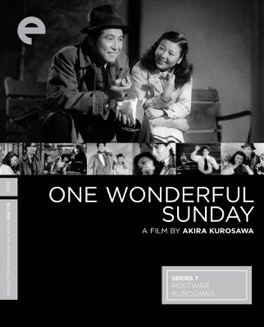 I’d really like to believe they opened their cafe someday. I think it’d do gangbusters. But, also, even kissing was off-limits in 1947?!? Damn.

There is a facade of good humor that can go a long way to keeping oneself moving throughout difficult times. To put it another way, one way to deal with true despair is to feign happiness. Fake it ’till you make it essentially. It’s very hard to remain unhappy if you pretend to be happy for long enough. The danger is that if your mask slips for even a second it can slip very hard.

This is the story of a postwar Japanese couple who are trying to make it, while retaining a strong moral center. They live in a society that is wrecked to the point that only the blackmarket is really a viable means of economic advancement, but they refuse to participate. It’s a noble sentiment. They are like the opposite of Harry Lime in The Third Man. Because they’re honest, they are truly struggling financially, to the point that they can’t get married because they can’t afford to live together.

For most of the film Masako maintains a happy-go-lucky perspective about their hardscrabble existence, constantly having to lift her boyfriend Yuzo out of despair. She shrugs off things like holes in her shoes or an apartment being too expensive. Yuzo, for his part, seems determined to bring them both down, unable to get out of his own head.

Eventually the whole things briefly flips, and then suddenly Yuzo seems to recapture his own sense of possibility. His own ambition. It’s a powerful moment, even though the film is fairly hackneyed in its presentation. Mostly it reminded me both of my incredible good fortune, but also of the importance of modifying ones attitude, when that’s the only thing one has any control over. - Aug 16th, 2022