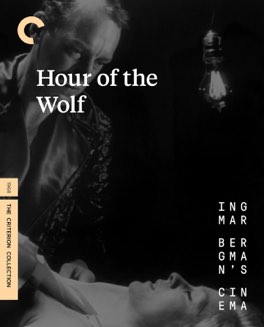 The madness of an artist is truly something, but, also, we do not deserve Liv Ullmann or Max von Sydow. Wow.

Hour of the Wolf

My availability to watch these films continues to charitably be called erratic. So excited I found the time to watch something, but oh boy I wasn’t really expecting a Bergman horror film, more or less in the Vampyr vein. My favorite director continues to give, however, and that’s exactly what I got. How wonderful, and utterly disturbing. Exactly the kind of thing Bergman would make.

One scene in particular sticks with me. The painter, Johan Borg, is explaining to his wife a story from his childhood. His parents, punishing him for some misdeed, confined him in a small closet in the dark. A closet they had previously told him contained a small creature who would eat his toes if he was bad. He eventually begged to be let out, and willingly encouraged his father to beat him with a cane.

This story apparently comes from Bergman’s actual childhood. It’s so incredibly upsetting. First of all, because it’s obviously horrific child abuse. But, what has stuck with me is the way that his parents maliciously abused his clearly very active and ripe imagination. To take a child like that and put that kind of imagery in his head as a threat? It’s almost worse than the physical violence that was enacted on him.

My oldest son is a very creative and imaginative kid. I can absolutely imagine the impact and effect that this kind of imagery would have on him. On top of that, he’s currently going through an age appropriate fear of darkness. To add to that? That’s just unspeakably cruel. - Jul 25th, 2022