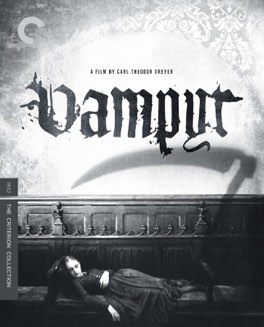 A true masterpiece, this film is absolutely breathtaking. Visually arresting, it played out as an incredibly beautiful and dreadful dream. I’m so glad I finally got to see this one.

I’ve been looking forward to watching this for quite some time, and I was absolutely not disappointed with what I got. What a surreally beautiful film this is, so full of absolutely mind-bogglingly gorgeous and creepy shots. The entire thing plays like a sort of slow-burn nightmare, right down to the almost total lack of dialogue present. It’s not a silent film, but it’s close, and that ends up working in its favor, as it gives the film an even stronger feeling of existing in a kind of waking dream world. People talk in dreams after all, but the talking is rarely the important part, something that’s extremely true here.

The imagery we get is just absolutely startlingly great. There are so many wonderful moments; I can’t remember a single scene or shot in the film that didn’t have me in awe at its perfect craft. This film is a masterclass on how to orchestrate and build a feeling of dread, that just keeps growing as the film goes along. It’s not a particularly scary movie in a conventional sense, it’s more disturbing than anything. Not in a keep-me-up-at-night way though, at least not for me, the images are just so beautiful and interesting that I was more obsessed with watching them than afraid of anything in particular.

The story follows a young man, Allan Gray, as he arrives at the village of Courtempierre, in northern France. In the opening text we’ve learned that Allan is a student of superstition and horror, someone who believes that the supernatural exists all around us. He’s been wandering around France and has found himself at a lonely looking inn near dark, in need of someplace to stay for the night. Allan rents a room and heads up to bed, but almost immediately begins to discover that something isn’t right in this village. He’s woken up by a gaunt looking man, who tells him that a child is in danger, and gives him an envelope to open only in case of the man’s death.

Allan, naturally disturbed, but also determined to do something about it, begins to investigate the mystery of exactly what’s going on here. But, and this is perhaps the brilliance of the film, he does it all very languidly. Rarely is anyone in this film in a hurry to get anywhere, or to do anything. There’s a real sense that things are just going to happen, and that there’s isn’t a supreme urgency to do anything about them. That pacing then creates real intensity during the moments in the film where action really is happening, and where the story is moving forward quickly. It creates an amazing tension as well, with the feeling of dread and wrongness growing as the film progresses.

It’s these qualities that make it feel so much like a dream to me. There’s something about Allan’s response, where he doesn’t seem all that surprised by what happens, but rather just adapts to whatever his present reality is. That feels extremely dreamlike to me, where everything that happens immediately has its own internal logic, that you don’t try to understand or examine. Things change in this film without a ton of explanation, like where the characters are or what they need to be doing, but it doesn’t feel jarring for exactly that same dream logic reason. Everything simply moves with its own rhythm, and provides its own justification for existence.

The other thing that makes it so dreamlike are the incredibly wonderful camera tricks that director Carl Th. Dreyer makes use of throughout the film. There are so many absolutely delightful uses of light and shadow, including a moment where we see a man’s shadow acting independent of the man himself. An entire shadow world is created here, disconnected from the world that our characters are moving through. There’s a magnificent scene where Allan wanders into a barn and sees a series of events being played out entirely by characters who only exist as shadows. The whole thing has an almost light box feel to it, or like watching a really creepy shadow play.

The way the lighting works in this film is a huge reason it’s as successful as it is. There’s an additional element here of light versus darkness, especially in the scenes where the characters are outside. These outside shots, and this may have just been a function of the technology of the time, are almost totally washed out. Almost as though we’re watching the characters move from behind gauze, or something else that provides a blurring effect. Again, I’m not sure this was intentional. The film doesn’t survive in the best possible state, so a lot of this may simply be that these were the best elements available to reconstruct this with. But, even if that’s true, it ends up being a happy accident, because it gives the whole thing a dimension I’m not sure it would have had if everything had been crisp and perfect.

I’m not a huge fan of modern horror films. They seem to place a premium on being visually icky, just one shot after another of the most depraved things the director can conjure up. It feels like watching them is an invitation for the director to plant things in my brain that I’d rather do without. The same is not true of classic horror though. Films like this one exist to create a sense of psychological dread, and I find them to be far more beautiful and interesting as a result. There’s such an element here, as there was with Island of Lost Souls, of scaring the audience using ideas, or a certain mood, rather than resorting to stunts or gore. What a wonderful film, it’s definitely one I want to watch many more times, to catch all the subtle intricacies I missed this time around. - Jan 17th, 2015