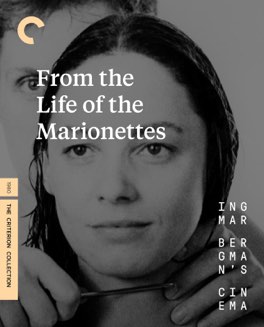 Somehow Swedish sensibilities come out much darker and colder when mixed with German ones.

From the Life of the Marionettes

I’ve mentioned before that writing, for me at least, is like a muscle. It needs to be exercised regularly. When I’m doing it as rarely as I am these days, it’s a bit like going back to the gym after a long break away. You know there will be a process of getting into it, and you’re definitely going to be sore afterwards. But, ever onwards my dear friends!

There are a couple things I found fascinating about this film. The first is the way that making it in Germany, with a German cast, changes its sensibility. There is something droll about Swedish disillusionment that is simply not present in the German variety. As a result, this film comes across much harsher and meaner. There’s less of a sense of the deep irony of life, and more just grim loss of humor. It’s especially interesting with the context that this is a spinoff of some minor characters from Scenes from a Marriage.

The other thing that has stuck with me, is that most of the writing I’ve found about this film comment on it as a story of repressed homosexuality, with some further describing it as a retrograde homophobic version of that story. I think this is misguided.

All of these ideas come from the character of the psychiatrist, Mogens, who presents them as an explanation for the brutality of the central murder. But the psychiatrist has already proven to be both an unreliable narrator, and bad at his job. He knew what the husband, Peter, was planning in a general sense, and did very little to stop it. To believe his characterization, and assume it’s the filmmaker’s intended meaning, is a version of the appeal to authority fallacy.

Bergman himself said that the various explanations presented in the film were intended to be non-conclusive. He wanted to showcase the ways in which love can be a prison, with the idea that people will do horrific things to escape. He specifically mentions that Mogens is interested in Peter’s wife Katarina, and is therefore helping to sabotage Peter’s life, in the hopes of taking her away from him.

Katarina’s friend, Tim, is similarly interested in Peter, and wants to slowly take him away from her, and that’s why he introduces Peter to the prostitute Ka. So, what we have is a bunch of people circling one another, all with their own agendas, and “meaning” isn’t really the point. They all fail Peter, and he fails himself, leading to the brutal murder of Ka.

The idea of repressed homosexuality is retrograde, but it’s also in the mouth of a loathsome man. Mogens is doing almost nothing to help anyone but himself. His self-serving explanation probably helps him sleep at night, but does little else to resolve the central conflict of the story. - May 12th, 2022