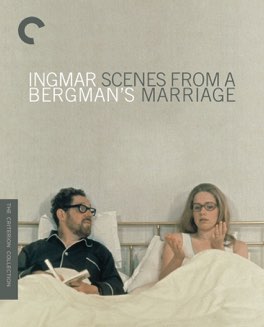 What is there to even say at this point? Five hours long and not a single wasted minute. This is a damn masterpiece.

Scenes from a Marriage

Timing is, as always, everything. I’m not sure that this would have had the same effect on me, had I seen it for the first time as a younger person. I simply didn’t have the context needed to fully appreciate what I was watching. I had never been in this kind of relationship, or been faced with these kinds of problems. All of this would have seemed so distant and irrelevant to me, even if I had found empathy for the characters involved.

This is the story of Marianne and Johan, the couple whose marriage we are seeing scenes from. As the story opens they are being interviewed for a magazine article about successful marriages. On the surface they seem to more than qualify. They are successful financially, in their careers, they have two daughters, and never quarrel. They are an inspiration. Of course things are never really that simple.

Over the course of the story they discover just how poorly their marriage was actually functioning. They also discover just how little they knew themselves, or each other. The story follows them as they get divorced, find other spouses, grow apart and together, and ultimately rediscover each other.

There is a moment near the end where Johan says to Marianne, that she needed to grow, to embrace how impressive and powerful she was. He, on other hand, needed to shrink, to realize how unimpressive and mediocre he really was. It’s a shocking moment. Accepting themselves for who they are has provided them with clarity. They no longer need the superficial perfectness of their marriage to distract themselves from themselves. Only after accepting themselves can they actually be honest with each other.

There are some parallels between their marriage and my own. It has certainly made me think about things. But, there is also one huge difference that I think changes everything. Marianne and Johan never fought, never expressed their true feelings, never challenged each other. It’s impossible to grow that way. So what happened instead is that they suffocated each other.

My wife and I, on the other hand, challenge each other constantly. We are always growing. My fear isn’t that we will wake up one day and realize we have always secretly hated each other and ourselves. That’s just not the problem we face.

As I mentioned, the story begins with their being interviewed about love. But they know nothing about love. All they know is how to appear to live up to expectations, and they’re honestly not even that good at that. Only at the end, after having gone through hell with each other, do they understand love. Only then do they truly love each other. The goal should be to get to that point, with as little of the hell as possible. - Sep 9th, 2020