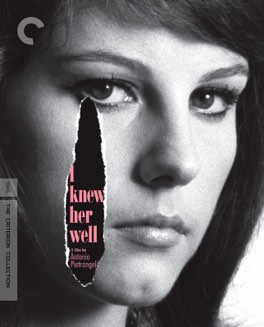 This affected me way more that I expected. I knew what was coming, and yet it still lingers. The Fantasticks knew exactly what it was doing with the song “Round and Round”.

I Knew Her Well

In the same sense of the title of this film, I have known many girls like this one. I say girl, even though she’s roughly in her early twenties, because she has a certain kind of eternal teen aura about her. This isn’t a grown-up woman, but rather a girl struggling to find her place in the world she’s inhabiting.

The world is not treating her with any particular kindness. This story is made up of a series of vignettes about the life of a wannabe starlet who has moved to Rome from the provinces seeking some kind of fame and fortune. She is preyed upon by essentially every man she meets. She is taken advantage of both professionally and personally. She’s having a great deal of fun along the way, but the kind of fun that leaves a psychological mark.

The title references the disconnect between knowing someone in a literal sense and having any actual understanding of who they really are as a person. As I’ve mentioned in previous essays, I was part of a scene when I was younger. I hung out with young and beautiful people who partied and were seen around town. I feel like I’m a million years old just describing it in those terms. My point is, I knew a lot of girls like this one, with their hairdos, dresses, and intoxicating mixture of intrigue and obvious lack of having one’s shit together.

For the most part, that scene was a very shallow place, but I tried to get to know them. What I found was that it was always some kind of facade, mixed with a lot of complexity and contradiction. These girls were mostly objectified. Young and pretty and to be used. But beyond that, they were, of course, actual people. They had quirks and dreams and goals and history. They were trying to get somewhere, and they were having varying mixtures of a great and awful time of it. They were actual people, with all that entails. What a shock.

I have a lot of sympathy for this girl. She’s a mess. She’s doing whatever makes sense in the moment. She doesn’t have a ton of self-respect. But she’s trying. The thing is, all the stuff she’s doing, all the people she’s meeting, they really are leaving a mark. Slowly but surely, she’s getting older, and she’s not finding the life she expected. Slowly she’s waking up to the reality of her situation and it’s not a particularly happy or fulfilling reality. At some point, something has to change. - Jun 4th, 2021