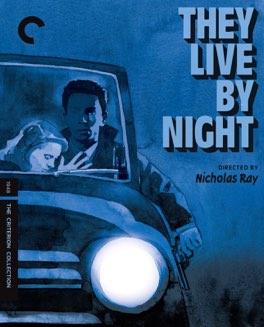 An enjoyable, if not particularly memorable experience.

They Live By Night

This film suffers from a problem that I’m honestly surprised I don’t run in to more doing this project. The problem is that this is an early version of ideas that were used to make later films that are much better than this one is. This is an earlier, rougher, less developed version of those ideas, and having seen and loved the later films it’s hard to go back and fully appreciate this unpolished version.

In this case the main film I’m unfavorably comparing it to is Badlands. In many ways they’re not that alike, but there’s still enough in the story of two loners in love, on something like a crime spree, that the comparison is annoyingly hard to avoid. It’s obviously not the fault of this film, but it has left me a bit lukewarm.

Probably the most interesting difference in this film is that here the lovers at the center are less wittingly involved in the circumstances of their inevitable doom. Don’t get me wrong, Bowie, the central male character, has absolutely chosen to be a bank robber. But there is such a strong sense that he has only done this in response to, at least in his mind, false imprisonment. One that has robbed him of a lot of his youth.

Certainly he tried to get out of the bank robbing business as soon as he found something better to do with his life. He is not committing crime for its own sake, nor is he any kind of evil. He’s just a guy making very poor decisions, which are painfully inevitable in their repercussions.

His love, Keechie, is almost totally innocent. She never participates in any wrongdoing, and is essentially simply unlucky enough to have been born into the wrong family. Watching her downfall, simply because of her own broken past and her love for this wayward guy, is the heartbreaking part of the story.

These are characters who are just searching for a way to be free. They will never find it. - Jul 3rd, 2020