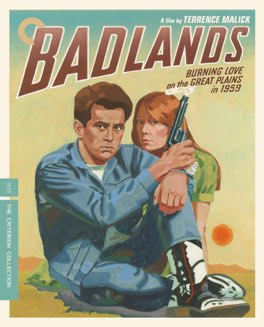 My first Malick film, and I already understand why people are obsessed with his visual sense. I’m so excited to see more of his work.

There is something disturbingly American about our collective love for the anti-hero, and specifically the charming serial killer. I’m not sure I have a handle on exactly what it is, but it seems like it has something to do with the absolute limits of individualism as an ideology.

The point at which one’s own needs are so toxic that they destroy the literal lives of the people around them. It’s a certain debonair lack of concern for others, that we seem to find morbidly appealing.

You can see definite links between this sort of allure of awfulness, and some of the current situations our society finds itself in.

This story is loosely based on a real life couple who committed a mass murder spree across Nebraska in the late fifties. In the film version, we follow a young girl who has moved from Texas to North Dakota, and the older man who takes a liking to her.

Holly is 15 when she meets the 25-year-old Kit. They start dating behind her father’s back, but eventually he discovers their relationship and threatens to end it. That sets off a murderous rampage where the couple travels around and Kit kills whoever they happen to encounter, with little to no plan as to what they are doing.

In the case of the real-life couple the film was based on, it’s always been somewhat unclear as to how much culpability the girl had, versus her older boyfriend.

She maintained she was essentially his hostage, while he asserted she had taken part in the killings themselves. In the film, it’s far more clear. Holly doesn’t kill anyone, but she also doesn’t try to leave, or really attempt to stop Kit in what he’s doing.

The one piece of this I haven’t really seen mentioned though, is what the effect of the huge age difference had on their relationship. Holly, and her real-life counterpart, were not fully consenting adults, and were extremely impressionable girls who were being manipulated by charismatic older men.

I’m not suggesting that means they’re completely innocent, but it does mitigate their culpability for me.

America has a problem with extreme individualism.

Our almost complete lack of communal instincts leads us to a great many decisions that preference the desires of one person, over the desires of a great many people. Ideally you want to strike a balance. Completely preferring the majority leads to serious problems as well.

Whatever that ideal balance is, we are far, far from it as a society. You can see that in the debates we have over gun control, abortion, private property, immigration, welfare, social security. In almost every case we preference individuals totally over groups.

This is not a film that’s directly about these issues, but the fascination we have with people like Kit is a symptom of the problem. - Oct 20th, 2018