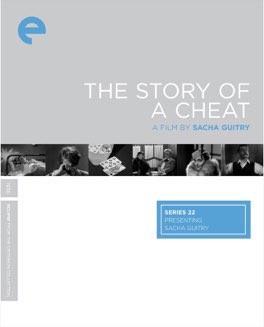 A perfectly pleasant little diversion, that lacks much to recommend it today. It’s nice though, and maybe that’s enough these days.

The Story of a Cheat

I believe I’ve mentioned this before, but it bears repeating; watching films from the distant past that are “ahead of their time” requires a certain understanding of what’s happening. If you don’t know the history surrounding the film, it doesn’t seem all that novel, because whatever it’s doing that’s new has, from our perspective, been done to death. This is the problem I had with Spinal Tap. Recognizing art for being ahead of its time requires context. It also doesn’t make the art itself any more or less enjoyable, just more understandable.

In the case of this film, it’s definitely ahead in some interesting ways, but the sum total effect is that this seems like a nice breezy film. Almost the entire thing is narrated, which lets it avoid a lot of the clunkiness of early sound technique. It lets Sacha Guitry play for some laughs that would have been much harder to do with direct sound. It also allows me to imagine that he might be an unreliable narrator, which seems likely given the absolutely ridiculous nature of the plot.

I don’t have much more to say about this. It’s charming, but I didn’t find it as charming as others seem to. It’s funny but not really laugh out loud. It’s fun. It’s a little trifle, which was exactly what I wanted when I sat down to watch it. I also think that’s what the film wants to be, so on that level I declare it a complete success. I’m sure you were all on pins and needles waiting for that! - Jun 7th, 2020