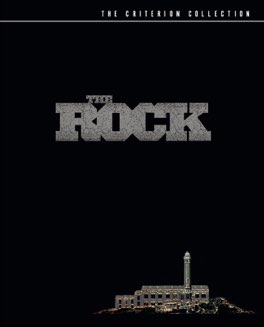 Somehow I made it all the way until now having never seen this movie, and that’s a crying shame! What a ridiculously fun piece of absurdity. I liked it!

The dialog for this film is painfully bad. Like bad to the point where it almost becomes funny, but then just keeps going to truly putrid. Basically everything is said in the most generic-action-guy way possible, and I cannot imagine what these actors thought as they read through the script. I can only assume they wondered how the hell they were possibly going to make any of this work.

Or maybe not, because if any actors are capable of taking words this stupid and making them work it’s Sean Connery and Nicholas Cage. Michael Bay could not have cast this insane thing better. Connery makes everything seem snarky, cool, and fun. Then there’s Nicholas Cage, an actor who should forever be celebrated for being one of the most singularly insane voices that we have been fortunate enough to capture on film.

All of that, plus the requisite ridiculous action, is what makes this film mostly work. It’s just fun. Sure, the words, as I have said, are absurdly, painfully, stupid. Sure the plot makes almost no kind of sense. Sure Michael Bay probably doesn’t need to pick the most dramatic camera move for literally every shot.

Then again, maybe he does. Tony Zhou, in his excellent essay series Every Frame a Painting covered the immensity that is Bayhem infinitely better than I can. All I’ll add is that it might be a pointlessly gratuitous style that weirdly flattens everything, but it’s still a style.

I’ve always felt that the people who question why this film is included in the collection are missing the point. Is The Blob great cinematic art? No, but it’s fun, and it’s representative of a moment in film history. The same is true of this.