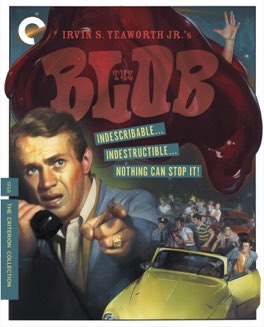 It’s so wonderfully nice to occasionally just sit back and be entertained. This film has very little going on, and that’s not necessarily a bad thing.

There is something existentially awesome about a faceless, nameless, monster, who kills simply as a force, lacking any semblance of personal agency. It’s somehow both more and less frightening to contemplate. On the one hand you can’t reason with it, you can’t persuade it, you can’t try to understand it. On the other hand, you don’t need to try and save it, or wonder about its humanity. It’s not a person and you don’t need to treat it like one.

All of this is to say that the titular Blob has a lot going on that the film doesn’t really delve in to much. The nature of the beast is unexamined, almost completely, in this film. It’s simply a catalyst. It’s the thing that makes everything else happen. It’s a plot device, not a character. As a result the film itself is more about everything else going on than the central disaster.

The everything else is the nature of small town America, and the nature of parent/child relationships. I’m not the first person to point out that leading man Steve McQueen is ludicrously too old to be convincing as a teenager, but the challenges he faces in this film with convincing the adults around him to take him seriously are totally believable. It’s an oddball mixture to be sure, but given that I was smiling basically the entire time, it worked for me. - Oct 24th, 2017